Lost Penguin Expected To Be Home For The New Year

Back in May a two-year-old Fjordland penguin that has been dubbed
Katrina turned up on a beach in South Australia. She was over 1,800
miles from her home turf in New Zealand and weighed less than 3 pounds.
The 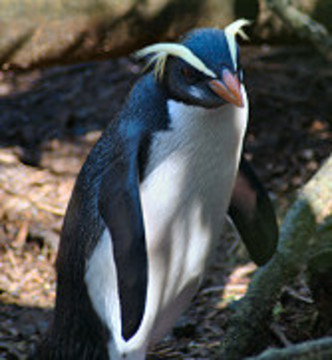 Fjordland Penguin (Photo by Thomas Mattern/Creative Commons via Wikimedia)emaciated bird required surgery to repair a gash in her stomach and
six months of recovery. Now she is headed home.

On November 2 a healthy and fully-recovered Katrina was taken back to the beach where she had first washed up. She took off into the ocean without a look back at those who had helped save her life. Her joy at being back in the ocean was enough for them. Her homing instincts seemed to be working and they expected that she would find her way home with no trouble. She was not fitted with a tracking device, so her itinerary was not certain.

"She was born in the wild and that's where she should be," commented Aaron Machado, of the animal sanctuary that cared for Katrina. With fair weather and fine currents, she could already be home with friends and family, and ready to ring in the New Year.