Long-Beaked Echidna May Not Be Extinct In Australia

A new study suggests that the critically endangered long-beaked echidna,
which was thought to be extinct in Australia since the end of the last
ice age, may still be alive. It has long been believed that the only remaining long-beaked 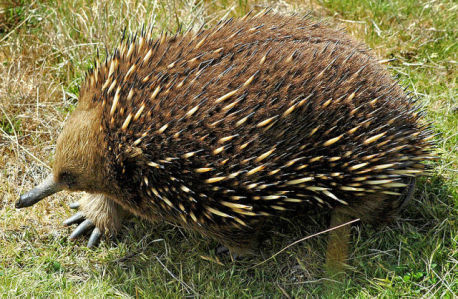 Short-Beaked Echidna (Photo by: KeresH/Creative Commons via Wikimedia)echidnas were to be found on the island of New Guinea.

The echidna is an egg-laying mammal related to the platypus. While it resembles hedgehogs and eats ants like an anteater, it is not related to either of those animals.

The hypothesis was driven by the discovery of a specimen of a long-beaked echidna from Australia dated 1901. The animal had been shot and stuffed and long-forgotten in a drawer in the Natural History Museum in London.  In addition to this rediscovery, more recent reports of sightings have come from among Aboriginal populations on the Australian continent.

The team involved in the study interviewed current Aboriginal populations where some people remembered the larger echidna from their youth.

The only way to be certain that the creature is not extinct in Australia after all would be to go in search of the animal. This would be a tall order since the elusive creature is naturally shy, goes out only at night, and curls into an unidentifiable ball at the first hint of danger.

The study not only highlights the possible survival of a species thought to be extinct in a certain area, but also the need to maintain museum collections and keep them up to date.