At Loggerheads, It's A Shell Game For Turtles Who Lack Social Networking

The act of turtles burying their heads in their shell was interpreted in idiom as the need to "come out of one's shell"-- or to become more sociable and less shy. While this reptile's shell makes a lot of sense in providing a protective shield from its enemies, there might be another reason for its existence. My thought is that turtles lack the social network from birth that most other species are accustomed to.

For humans, the impetus to gravitate towards Web 2.0 and social networking was partially due to the evolution of collaboration and cooperation online vis a vis the Web. Nurtured from birth by one's parents and family, with a new playground to play in, man's inherent need to relate to others grew exponentially when we were introduced to the Internet.

Marine turtles on the other hand lay eggs in mass, but don't provide any parental care for their turtle hatchlings. Mother turtles deposit their eggs in holes dug in the mud or sand, then covers them up to incubate on their own. And like a dead-beat Mom, she deserts her progeny to fend for themselves, as witnessed with these turtles at Shark Bay, Australia.

So, it is my contention, that turtles need their shells as a place to live out their lonely existences. It's a place of solitude that must bring them comfort similar to the womb-like environment they experienced in their shells.

Loggerhead Sea Turtles (Caretta caretta) are large, hard shelled sea turtles found in the Atlantic, Pacific and Indian Oceans. Their eggs are laid in the sand, close to the water's edge, where hatchlings need to quickly wriggle towards the water, to escape from predators, such as crabs, toads, snakes and various species of seabirds. Hatchlings can lose up to 20% of their body mass due to evaporation of water as they journey from nest to ocean. Typically, those that lack the vitality to hatch and climb to the surface die.

As an oceanic turtle, it measures around 90 centimeters long when fully grown, although larger specimens of up to 270 centimeters have been discovered  in various parts of the world. They reach sexual maturity within 17–33 years and have a lifespan of 47–67 years. 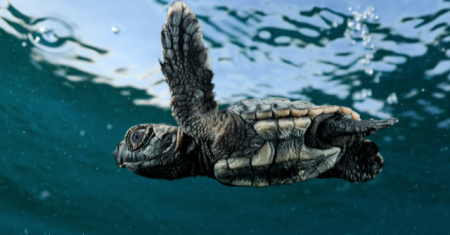 Adult Loggerhead Turtle
A sad by-product of their lonely existence is compounded by the fact that they have been considered an endangered species since 1978. Protected by the International Union for the Conservation of Nature, untended fishing gear is responsible for many loggerhead deaths. Others are often suffocated when trapped in fishing trawls.

Efforts to restore their numbers will require international cooperation, since the turtles roam vast areas of ocean and critical nesting beaches are scattered across several countries. So while these turtles can't tap into their own social networks for assistance, perhaps humans can peak their heads out of their collective social shell and talk up the plight of the Loggerheads with their friend and followers. After all, being deserted at birth is a rough row to hoe. . . for any species. 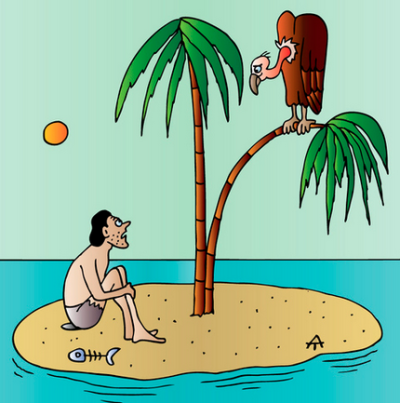 Want To Know Everything About The Landsnail, And Laugh While Doing It? The Fun Animal Video Of The Day!!!
Comments