This subject is disturbing to Westerners, but to the Chinese it is just
another day. Culturally our belief in animal rights and theirs are as
different as our languages are. Every day in China people are buying key
chains that contain live turtles, salamanders, and fish enclosed in a
plastic pouch filled with colored water and an herbal solution. The creatures die slowly
over a period of one to three months. 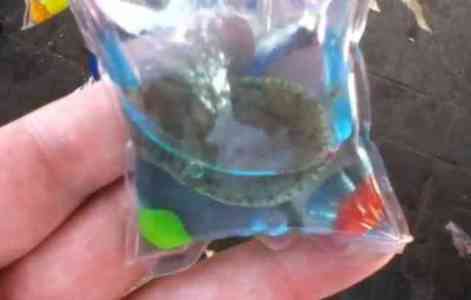 Key chains with live fish in them were sold by vendors during the summer Olympics in 2008 and were mostly bought by children in city of Qingdao, where the sailing events were being held. Fish were one of the mascots of the Beijing Olympic Games. These particular fish reportedly only had hours to live.

The key chains more recently started showing up for sale on the streets of China in early 2011. These street vendors are usually seen selling around the entrances to subways and in train stations. The key chains are considered to bring good luck. The price for each one of these items is equivalent to about 80 cents in the United States.

Animal rights activists and environmentalists are protesting the sale of the live key chains, but there is little that they can do.  The Chinese government is suspicious of environmental groups so the groups have no sway with government officials. China only has a Wild Animal Protection Act and these creatures do not qualify for protection under the act, presumably because they are considered pets. There are no laws against cruelty to animals in China.

Realistically, the best activists can hope for at this time is to appeal to individuals not to purchase the key chains and let the lack of demand kill the market.  Nevertheless, there is an online petition against the petition.