Early this month a pair of lions, Aru and Aketi, at the zoo in Berlin
were found foaming at the mouth and critically ill. They developed
stomach pains from colic that left them crying in distress. The other 14 big
cats at the zoo showed no signs of the illness, ruling out the zoo's
meat supply as the culprit. 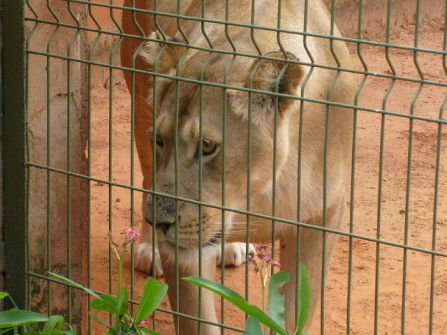 The lions are slowly recovering and zookeepers are waiting for them to become stronger before they take blood samples to determine what specifically caused the illness. To take blood samples they will have to be anesthetized and that will require them to be stronger than they are now. Zookeepers believe that one of the zoo's visitors threw something into the lions' enclosure that they ingested.

Zoo patrons routinely ignore the signs outside every enclosure that warn not to feed the animals. The staff removes leftover hamburgers, pizza, ice cream, and cakes that visitors have pushed through the bars every day. They also have to clear away non-food items like plastic cups.

The Berlin Zoo is the most visited zoo in Europe with three million visitors annually. Most of the animals are housed in enclosures that re-create their native habitats. This is the first such incident in 25 years.

How To Get Your Cat To Brush Her Own Teeth