Large Animals Make For Big Business In The Airline Industry 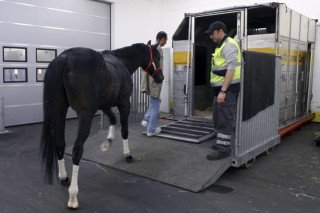 While the U.S. pet carrier Pet Airways seems to be having trouble getting off the ground, airlines like Germany's Lufthansa, Air France-KLM, and Emirates are enjoying their success at not only carrying household pets, but large animals - rhinos, horses, tigers....  You name it, and one of the airlines will carry it, unless it's a poisonous snake or an illegally caught wild animal.

The Frankfurt airport, which hosts Lufthansa Airlines, has created an animal lounge that cost more than 10 million euros ($13.2 million) to build.  In addition to carrying zoo animals, pigs, horses, and tropical fish, the airlines caters to people who want their Rottweilers, or other German dogs, to come straight from the motherland.  And it even ships live bait for fishermen.

Animal cargo is a very specialized business requiring very specific safeguards from the airlines. For each animal, plane cargo cabins need to be regulated for temperature and humidity.  For fish, the right type of water and right amount of oxygen is needed.  But the higher the risk that the animal might not last the flight, the higher the profit, so the airlines are encouraged to meet those standards.

Just in case you're wondering about how much fares might be - say for a dog or a horse to make a trans-Atlantic flight - a dog flying Lufthansa from Frankfurt to Detroit would cost about 800 euros (approximately $1,052), while three horses would cost about 4000 euros, or about $5300, each. The passage fees for these animals are about five times more than non-living cargo of the same weight.