Two weeks ago three Los Angeles police officers were on their way back
to their station at the end of their shift when they stopped to help a
seriously injured that had been hit by a car. At first they weren't even
sure that the 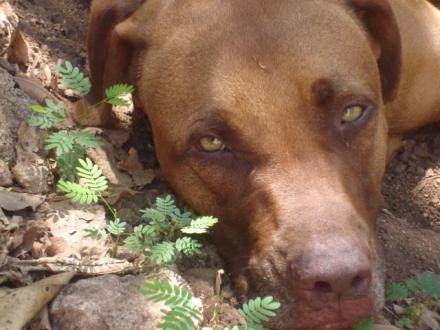 Pit Bull (Public Domain Image) animal really was a dog. Witnesses told the officers that
the dog had been suffering there for at least five hours with his ribs
exposed. The officers rushed the dog to a veterinarian where the pit
bull-Shar Pei mix underwent emergency surgery.

Upon finding the dog, the officers brought him food and water from a nearby taco truck. He struggled to get to the food, but was too injured to make it. While his body was broken, his spirit had obviously remained strong.

After the surgery to mend the broken leg and two fractured ribs, the vet discovered that the dog had a microchip identifying his owner.  The officers contacted the owner, who showed little concern over the dog's rescue. She said that she was busy and would call back later. Basically, the officers took her comments and attitude as telling them to put the dog to sleep.

The officers have named the dog Philly after a police sergeant and are now fostering him until he is healed and ready to go to his forever home. He has developed a respiratory infection after the surgery, but seems to be doing well recovering on all fronts.

Dogs
News Stories
Rescue
Actor Patrick Stewart 'Gets Tough' on Dog Fighting With The Help Of The ASPCA
A Pinch In Time: Acupuncture For Our Pets

PetsLady's Pick: Cute Hanukkah Regrets Dog Of The Day
UPS Dogs Have Their Own Facebook Page Where Drivers Post Their Favorite Pups
Comments