Koshka: A Cat From Afghanistan

Staff Sergeant Jesse Knott was already a combat veteran of Iraq when he
was deployed to Afghanistan in 2010. Just about anyone can tell you that
life in a war zone is anything but business as usual. It is a situation
rife with stress. That is one of the reasons that Knott was drawn to a
little stray cat that he saw wandering in and out of camp. Slowly a
friendship began to blossom between the two. 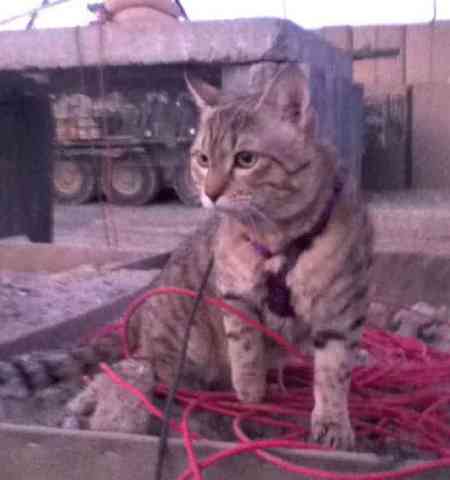 Koshka In Afghanistant (You Tube Image)

In Afghanistan cats are considered more like wild animals and are not treated as pets. As Knott got to know the small cat he called Koshka (Russian for cat), he started to notice signs that he was being abused. A couple of times Knott noticed paint in Koshka's fur, Once Koshka showed up with part of his fur shaved off so close that there were cuts in his skin. When Koshka finally came limping into camp with a badly bleeding paw and what appeared to be a hip injury Knott knew that something had to be done.

Ordinarily soldiers are not allowed to keep pets, but Knott was in an administrative position on this tour and he made space for the cat in his tiny office. Koshka took happily to his new place of residence and his new roommate. For Knott it was a small, furry bit of normal in an intensely abnormal situation. It reminded him of home back in Oregon. His superiors turned a blind eye to his live-in companion.

Then a suicide bomber killed two of Knott's best friends and wounded others. The news plunged him into a deep, dark place of despair from which he could not see any ray 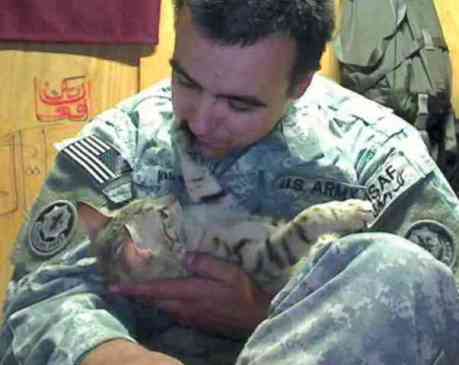 Koshka and Knott Together in Afghanistan (You Tube Image)of hope in life. He sat at his desk in tears, feeling completely inconsolable and heartbroken. What was the point of going on? Then Koshka climbed into his lap and looked at him solemnly. Koshka put one paw on Knott's lips. It was as though Koshka understood,  was saying that he sympathized, and that there was still good to be found in life. Having had his say, he curled up in Knott's lap and began to purr.

As any cat lover knows, there is little more comforting and healing than the sound of a cat's purr.  It is a song of life. The cat had just helped pull Knott though one of the darkest moments of his life. It was then that Knott became aware that he could not leave his savior behind in a war zone when the time came to return home. It was his turn to rescue the cat from a dark place. He was due to be redeployed at any time, so time was of the essence. 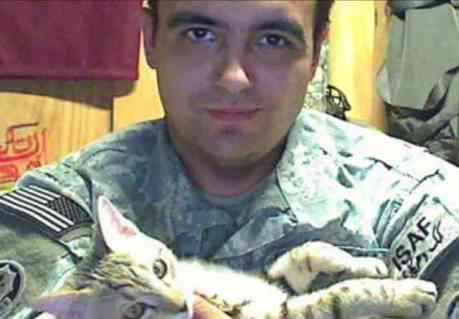 Koshka and Knott Together in Afghanistan (You Tube Image)

Eventually Knott found a local interpreter who was about to go on leave to Kabul and was willing to take Koshka with him. The interpreter was risking his life for the cat. He was going to pass through many Taliban checkpoints along the way and if he was caught doing a favor for an American it would mean death to both him and Koshka. In a bright purple harness and was being transported in an American cat carrier there was no way to hide the American connection. It was a journey that had no guarantee of success.

The pair did manage to make the trip without incident, though it took several nerve-wracking days for the news to reach Knott. Koshka was then flown from Kabul to Islamabad, Pakistan on the next leg of his journey. From there he flew to Europe, then New York and finally home to Knott's parent's house in Oregon. Koshka's entire journey took about a month. 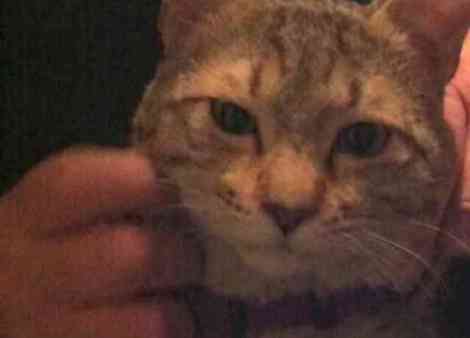 Koshka In Love (You Tube Image)At the other end of things Knott had his family and friends working to raise the necessary funds to pay for Koshka's journey home. The total cost of the operation was nearly $3,000. The wonderful things people will do for the love of cats!

Koshka is now happily at home with Knott's parents in Oregon City. Knott has been stationed in Washington state where he could travel home as often as possible to visit his kitty. He is due to leave the military soon so that they can truly start their life together.

At the end of February 2013, the pair was given the Oregon Humane Society's Diamond Collar Hero award for their efforts. As they put it, "sometimes we save animals, sometimes animals save us."

That statement echoes what Knott said about Koshka: "He was my saving grace. He kept me alive during that tour."

The Spectre Of Lunches Yet To Come

There Is Nothing Cute About A Cuterebra Infestation