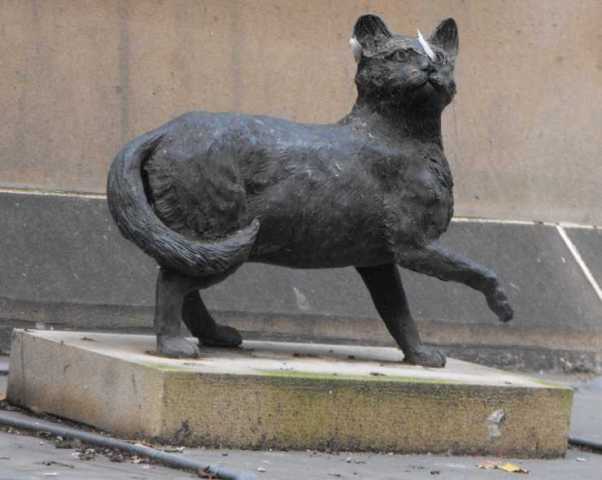 Trim, a black cat with white paws, chest and chin, was born in 1799 aboard the ship Roundabout during its voyage from the Cape of Good Hope to Botany Bay, Australia. While still a kitten, Trim fell overboard but managed to get back on deck by climbing a rope. Thus proving his survival instincts, Trim was treasured by the ship's crew and when Captain Matthew Flinders RN was given command of HMS Investigator, he made sure Trim accompanied him as the official ship's cat.

Trim became the first cat to circumnavigate the continent of Australia by virtue of her residency aboard HMS Investigator, completing the arduous year-long voyage in June of 1803. Flinders' respect for Trim was such that when he was imprisoned by French authorities in Mauritius, Trim shared his confinement. Though Flinders survived the six-year sentence, however, Trim did not. This loyal ship's cat was commemorated in 1996 by a bronze statue installed on a window ledge at Sydney's Mitchell Library. (ship's cat image via Maritime Quest) 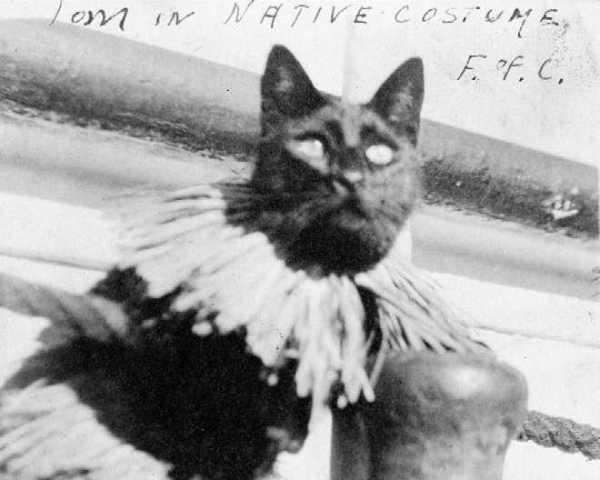 The Falls of Clyde was an iron-hulled, four-masted windjammer launched in 1878. Presently preserved as a museum ship in Honolulu harbor, the vessel spent a good portion of her working career as a passenger and cargo ship plying the seas around the Hawaiian Islands.

The photo above depicts Tom, the ship's cat, “in native costume” and although undated can be reasonably attributed to sometime between 1899 and 1907; the Falls of Clyde's Hawaiian heyday. (ship's cat image via San Francisco Maritime National Historical Park) 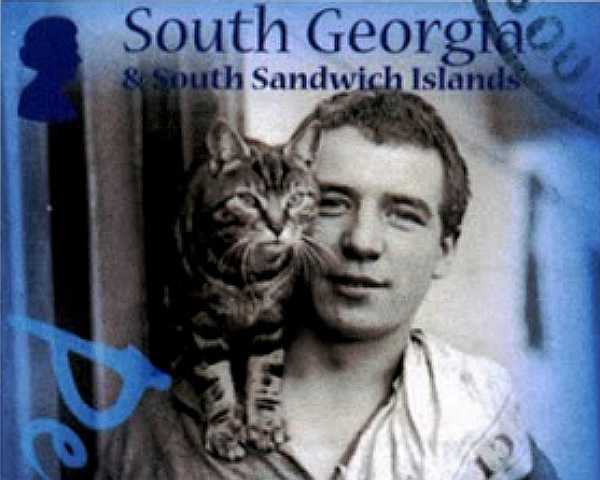 Mrs. Chippy was a male (yes, male) tabby cat belonging to Harry McNish, chief carpenter aboard Sir Ernest Shackleton's ill-fated Imperial Trans-Antarctic Expedition of 1914-17. Though beloved by the crew of the Endurance, Mrs. Chippy and all of the expedition's sled dogs were ordered to be shot when the ship was crushed by the antarctic ice pack and had to be abandoned. It's said that McNish held a lifelong grudge against Shackleton over this harsh but necessary act.

When McNish's final resting place in Wellington, New Zealand was renovated in 2004, the New Zealand Antarctic Society commissioned a life-sized bronze statue of Mrs. Chippy and arranged for it be placed on the grave. (ship's cat image via South Georgia and South Sandwich Islands) 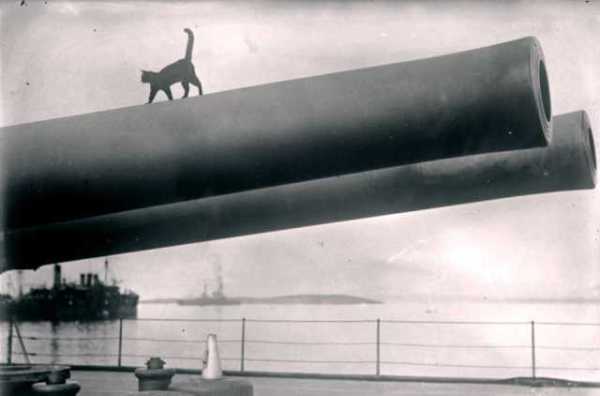 As depicted in this Official Press Photograph dating from March of 1915, the mascot cat of H.M.S Queen Elizabeth casually strolls along one of the Royal Navy super-dreadnought battleship's 15"guns. She's too sexy for the catwalk, presumably.

Though the cat's name is unknown, it must have brought the ship some luck as the H.M.S Queen Elizabeth survived both World Wars before being scrapped in 1948. (ship's cat image via DogByte6RER) 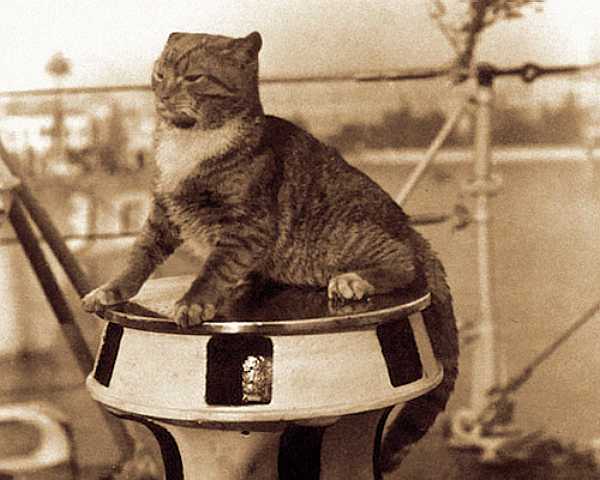 Meet Wockle, ship's cat of the USS Flusser and master & commander of all he surveys! The Flusser was a US navy destroyer built by Bethlehem Shipbuilding Corporation in Squantum, Massachusetts, and launched in 1919.

The Flusser spent the bulk of her career on this side of the pond but between June of 1924 and July of 1925 she served with U.S. Naval Forces, Europe. The ship made port calls in 15 different countries including Venice, Italy where Wockle was snapped on the capstan looking exceptionally bellicose. (ship's cat image via USNI Naval History Blog) 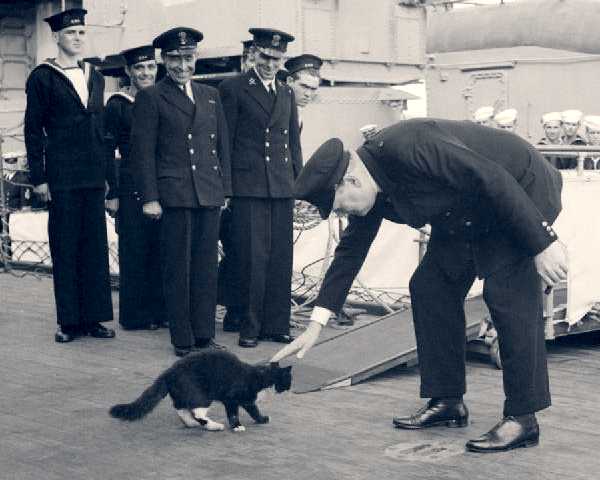 Blackie was the ship's cat of the Royal Navy battleship HMS Prince of Wales. In August of 1941, the ship conveyed British PM Winston Churchill to Newfoundland for the Atlantic Charter conference with FDR. As Blackie ambled over to the battleship's gangplank, Churchill restrained him by gently petting his head – a moment caught on film for posterity.

Blackie's encounter with the great man resulted in his receiving new name, “Churchill”. Although the re-monikered mascot survived the sinking of the Prince of Wales later that year and managed to make it to Singapore, he could not be found when the order came to evacuate the colony's naval base in early 1942. (ship's cat image via Imperial War Museum) 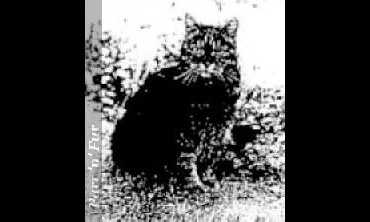 As detailed in Laurie Kay Olson's article (Sam, The Unsinkable Cat), this fortunate feline and “professional” ship's cat survived the wartime torpedoing and loss of three successive vessels (one German and two British) in 1941.

At that point, we must assume the powers that be either hoped to preserve Unsinkable Sam's seemingly charmed life or perhaps feared he was some sort of fur-bearing nautical curse. Irregardless of the reason, Sam was forced to accept retirement and he eventually ended his storied life in 1955, back on dry ground at the Home for Sailors in Belfast. (ship's cat image via Purr'n'Fur) 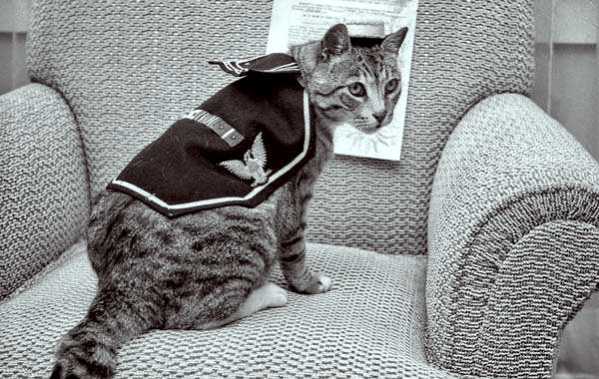 A cat surviving a Second World War battle zone is one thing, living a further fifteen years is quite another yet a cat named Pooli can make that claim. Pooli (short for “Princess Papule”) was born on July 4th, 1944, in the Navy yard at Pearl Harbor and set sail that very day aboard the attack transport ship USS Fremont.

Over the next year, the Fremont and her furry mascot saw action from the Philippines to Iwo Jima. Well, the Fremont and her human crew did: whenever battle stations sounded, Pooli would make a beeline for the mail room and snooze in a mail bag. Both the Fremont and her crew (Pooli included) made it through the war and enjoyed a comparatively quiet peacetime retirement. That's Pooli above at the age of fifteen in 1959, smartly modeling her old dress uniform displaying three service ribbons and four battle stars. (ship's cat image via Dakota The Bunnyfaced Lion) 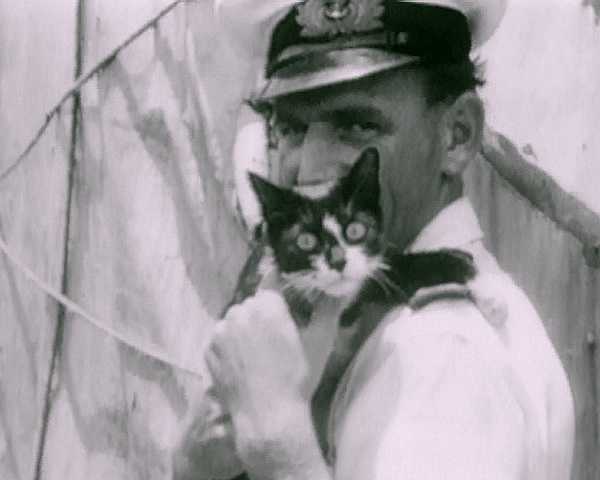 In March of 1948, a crewman of the British frigate HMS Amethyst found an emaciated young black & white cat wandering the Hong Kong dockyards. After being smuggled on board the Amethyst, Simon (as he was dubbed) soon won the crew's admiration by relentlessly pursuing and dispatching as many rats as he could find.

This was the era of the Cold War, which for Simon and his shipmates was about to heat up. In April of 1949, the Amethyst was fired upon by Communist Chinese shore batteries and Simon, asleep in the captain's cabin, was seriously injured. Treated by the ship's medical staff, Simon wasn't expected to survive his wounds but once again he beat the odds.

After the Amethyst was finally able to escape Chinese waters in July of 1948, Simon's story could be told to the wider world. The plucky feline was awarded a host of medals and was bestowed the unofficial rank of Able Seacat. Sadly, Simon wasn't able to win his last battle, succumbing in November of 1949 to a viral infection he caught while in quarantine after returning to Great Britain. (ship's cat image via Maritime Quest)

Nine legendary ship's cats; nine nifty nautical lives. Though cats are still getting their sea legs these days, policies like the Royal Navy's ban on shipboard pets (in effect since 1975) make it increasingly unlikely the exploits of some of history's most famous ship's cats will ever be equaled.

So sit back, straighten your whiskers (if you've got 'em), and raise a glass of milk to these incredible kittens of the sea! (ship's cat image via Pixabay)