The latest reports from the gossip quarters say that the woman who threw a cake flour bomb at Kim Kardashian does have ties to PETA, the People for the Ethical Treatment of Animals, although PETA still claims that it had nothing to do with the bombs.  Why, then, is the organization offering to put up the money to defend the still nameless bomber if Kardashian decides to press charges? 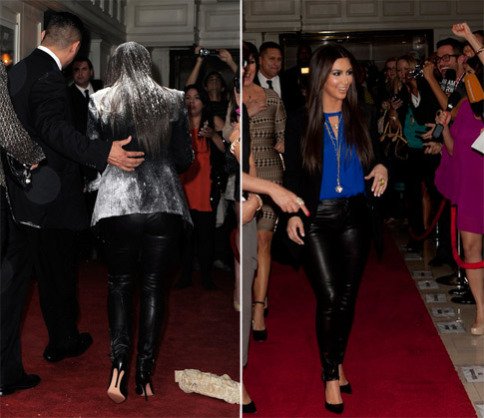 Kim Kardashian gets flour-bombed as she introduces her new perfume at the London Hotel in West Hollywood: image via khloekardashian.celebuzz.com/

With this news, Khloé Kardashian has quit the organization, which she formerly strongly supported. I just received word that the woman responsible has very close ties to PETA,
despite PETA publicly stating otherwise," Khloé writes on her blog. "Not only has PETA lied
to the public, but they have proved that they support this kind of behavior."

Even though Kim Kardashian wasn't wearing one of the furs that have stirred up so much ire at PETA, an organization spokesperson, though denying responsibility for the attack, did suggest that if Kardashian had donated her "vulgar furs and exotic animal skins to the homeless," the attack might not have taken place.

As Khloé writes, "Bullying and harassment is NEVER a solution, and I won’t be a part of any
organization that thinks otherwise."

How to Buy the Shironeko Stuffed "Zen Cat" Doll