Yes, just 10 unbelievably brilliant photographs to show you from the group of 100 finalists of the British Natural History Museum's Wildlife Photographer of the Year Award 2015.  The competition is now 51 years old, the oldest and most prestigious wildlife photography challenge in the world, open to professional and amateur photographers of all ages.   If you're considering entering next year, you will be welcome, but take a look at the kind of competition you'll be facing....

I wish I knew how the judges were able to select just 100 short-list photos from 42,000 entries; what a logistical challenge that must be! These 10 photos are teasers, though, to get you excited to see the exhibit of 100 showing at the Natural History Museum in London from October 16, 2015 through April 10, 2016.  Maybe one of the following photos will be the winner.

1. To Drink Or Not: Carlos Perez Naval, Photographer 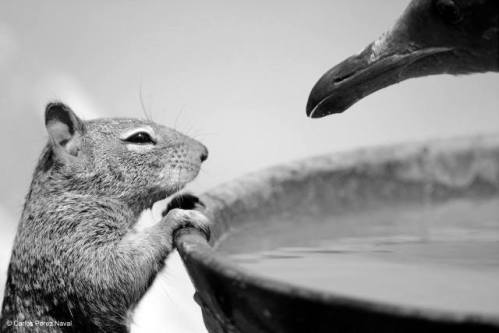 To Drink Or Not: photo by Carlos Perez Naval/ Wildlife Photographer of the Year 2015

To
Drink Or Not was selected as a finalist from the Under 10 (years of
age) photographer category.   Carlos Perez Naval, just 9 years old, was
fortunate to snap this photo before the western gull pounded the ground
squirrel in the head with his beak. Naval had been watching this happen every time a ground squirrel came near the water. From Spain, Naval was vacationing in Morro Bay California with his family when he took this
photo. 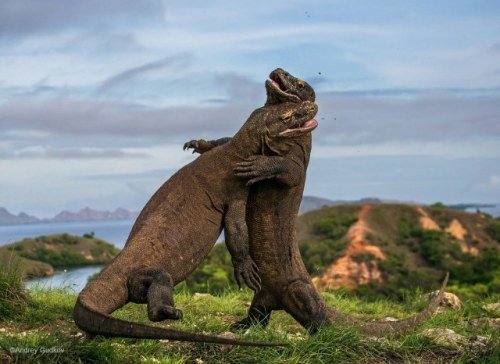 This photograph is of two male Komodo dragons, the largest of the lizard family, fighting on Rinca Island, East Nusa Tenggara, Indonesia.  The image was shot in December, long after the mating season, when one might expect to find males fighting, so it was unusual enough to see this event, never mind capture it.  As dangerous as it was to snap this photo and get away...

3.  It Came From The Deep: Fabien Michenet, Photographer 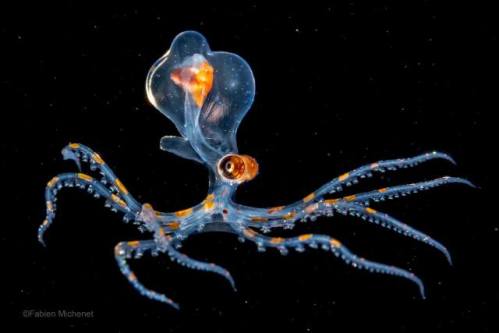 It Came From The Deep: photo by Fabien Michenet/Wildlife Photographer of the Year 2015

Deep waters off the coast of Tahiti are home to this baby octopus.  At 66 feet deep, Michenet spotted this transparent creature hunting for crustaceans, where Michenet suspects the octopus was taking advantage of his camera lights to find his dinner. 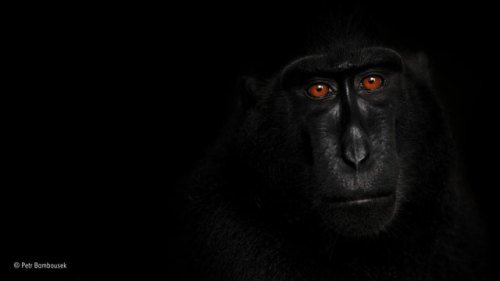 There are not many Museum notes on this photograph, but Petr Bambousek's Black Crested Macaque is definitely one of the finalists in the Wildlife Photographer of the Year 2015 competition.... because it's the mascot for the competition on much of the Museum's publicity materials. The photographer writes, below in the comments section, that this hauntingly beautiful photograph was taken on the island of Sulawesi, Indonesia. 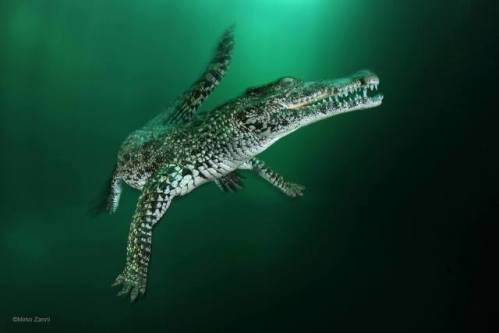 Cuban Survivor: photo by Mirko Zanni/Wildlife Photographer of the Year 2015

Hunting and hybridization have threatened the beautiful Cuban crocodile and now there are only 3,000 to 6,000 of them left in the in the Zapata Swamp in western Cuba and in the Lanier Swamp on the nearby Isle of Youth.  The Cuban crocodile has an unusual pearly skin, is very strong for its size, and is said to be the most intelligent of crocodiles.  ‘I spent hours in the water with this one,’ Mirko Zanni says. At one point, 'it sank down right in front of me, very close.’ 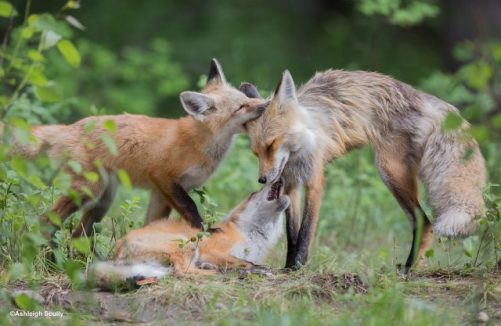 Mama's Back: photo by Ashley Scully/Wildlife Photographer of the Year 2015

Ashleigh Scully was in Grand Teton National Park in Wyoming attending a photography course when she saw two fox cubs playing in a clearing. Then their mother arrived from out of the woods, and the cubs were so thrilled, they showered her with love.  "There was so much affection there," said Ms. Scully, who is 12 years old and has already sold a book of her fox photos to raise money for conservation. 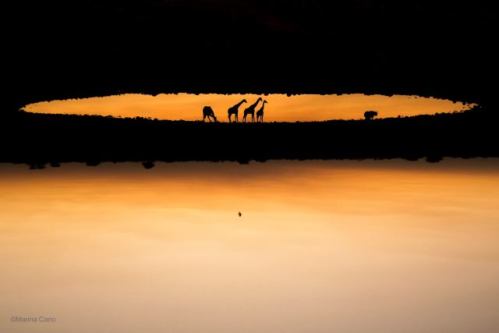 Heaven On Earth: photo by Marina Cano/Wildlife Photographer of the Year 2015

This image was shot from a campsite in Namibia’s Etosha National Park.  It was sunset and the giraffes stopped right near a black rhino to drink from a water hole.  They took turns, one by one splaying their legs so they could reach the water from their great height.  Ms. Cano has flipped the top of the photo so you can see the animals right side up, but look at the lower half of the photo.... 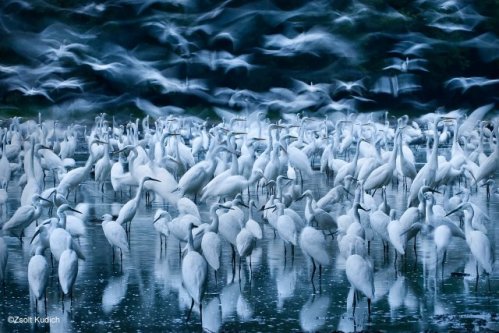 Egrets had almost become extinct along the Danube River in the early 1920's.  Very recently though, thousands of these elegant birds fly to Hungary where lakes are filled with overflow from the Danube and there are plenty of washed up amphibians, fish, and vertebrates to eat.  Kudicht says that more than 1,000 egrets flock to the lake in Hungary's Gemenc Forest. It certainly looks like they were all there in the early morning when Kudicht took this spellbinding shot. 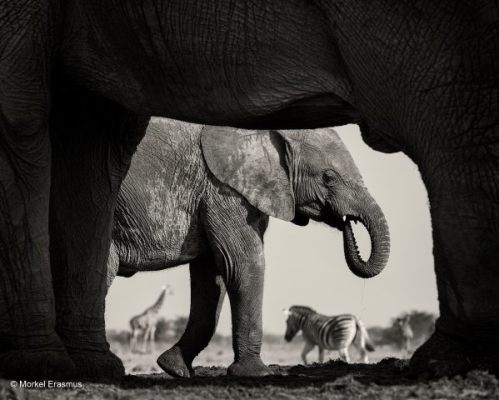 Natural Frame: photo by Morkel Erasmus/Wildlife Photographer of the Year 2015

Photographer Erasmus had an unusual vantage point during this photo shoot. He was very close, right next to a remote water hole in the Namibia Etosha National Park, where animals were gathering, but he was stationary, sunk in a bunker near the hole.  His view was often blocked by the elephants, so he had to wait for the shot to come to him.  Finally, he was able to grab this one:  A mother elephant whose legs framed that of her calf whose legs framed a giraffe.... What timing, Mr. Erasmus! 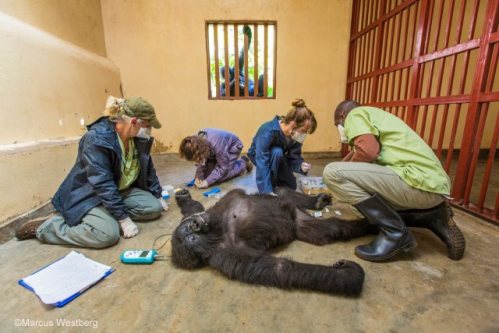 Gorilla Doctors: photo by Marcus Westburg/Wildlife Photographer of the Year 2015

Luck would have it that there was an excellent photographer around when orphaned gorilla Maisha was getting her physical.  Maisha is a lucky member of the orphan gorilla program at the Senkwekwe Mountain Gorilla Center at the Verunga National Park in the Democratic Republic of the Congo.   Her concerned friend, Ndeze, watches over her through the window.

We should all try to buzz over to the Wildlife Photographer of the Year 2015 exhibit opening at the Natural History Museum in London, October 16, 2015, and remaining open until April 10, 2016.