Jet And Miri: A Love Story That Is All Wet

There are many odd animal pairings out there and we love them all. None
are quite as unusual as Jet and Miri because they are often in over
their heads. In a pool that is. Jet the dolphin and Miri the seal are
BFFs at the Pet Porpoise Pool in Coff's Harbor, Australia. They were
born in the marine park and were introduced to one another when they
were just months old. It was love and first sight. 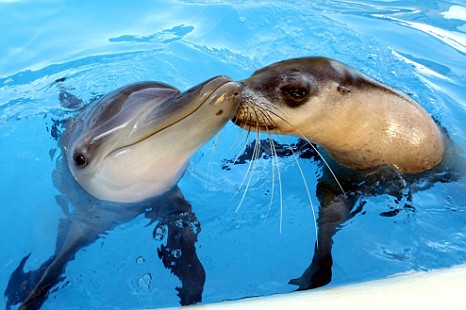 Jet and Miri (Image via Imgur)

In the wild Jet and Miri would never have become friends. Out in the ocean they would be competitors for the same resources -- sometimes fierce competitors. In the safety and security of their marine park home they have forged an unusual friendship and have no idea that they aren't supposed to be best buddies.

They swim together, play games, frolic, and even kiss. Miri will bark at Jet and Jet will make clicking noises right back. The whole thing is irresistibly adorable. 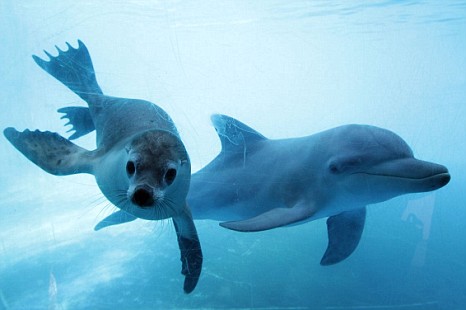 Jet and Miri (Image via Metro)

Pet Porpoise Pool, a.k.a. Dolphin Marine Magic, opened back in 1970 as a center for native Australian marine life rescue and rehabilitation. In addition to dolphins and seals, the center houses penguins, turtles, and sea lions.

Jet and Miri's relationship may not have been made in heaven, but it was at least blessed by Poseidon himself.