You drop your kid off on the corner to wait for the school bus, notice an unattended backpack, open it up to find out who owns it and discover a huge Western diamondback rattlesnake inside…

An observant parent at a school bus stop in New Braunfels, Texas, went through the horror of opening that backpack containing the 3.5 foot long rattlesnake. Thankfully the snake did not bite anyone, and the large venomous reptile was taken to the “Animal World and Snake Farm” near Austin. The snake will be released back into the wild, but not before police wrap up their investigation of the incident.

It is extremely unlikely that the rattlesnake crawled into the backpack on its own, and police suspect that someone placed the snake in the backpack and intentionally deserted it at the bus stop. Investigators are still trying to find the woman who tipped off the police about the snake in the first place. 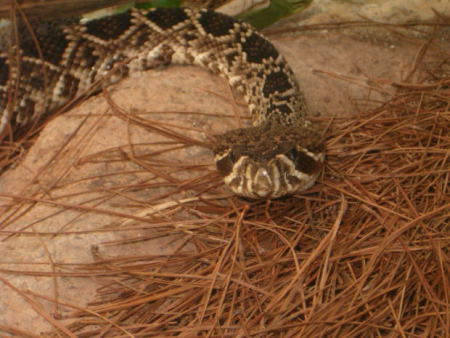 Western diamondback rattlesnakes are common throughout the south-western United States and Mexico. This large, venomous reptile feeds on a large variety of small animals, such as rodents, lizards, birds and rabbits. This is an aggressive, solitary snake that can be found in burrows made by other creatures.