Pets Age With Dignity And Plenty Of Technology In Japan

Voluntary euthanasia is legal in Japan and surveys have shown that the majority of Japanese people support it, especially in terminal cases.  But the focus and originality of assistive treatments and therapy available for aged cats and dogs in Japan suggest that Japanese pet owners do not readily accept euthanasia for their furry family members.

In 2009, the pet market in Japan was barely behind the that of the U.S. - $2 trillion Japan, $2.1 trillion U.S.  At the rate it had been growing from 2005 to 2009, the pet industry in Japan has likely already surpassed ours, despite its having a 60 percent smaller population of humans. 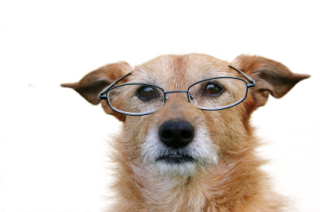 Elderly dogs may one day be able to read again: image via texasdogsandcats.com Part of the growth, at least, has to due with a particular growing facet of the pet industry: age and illness-specific foods, special assistive beds with handles to turn an aging pet, diapers, carts, slings, accessible diagnostic technologies, such as CT and MRI scanning, and  24 hour pet emergency hospitals.  Fujitsu Ltd. is even teaming up with veterinarians to offer 24-hour home care for pets.

Researchers are even looking into tissue engineering for pets.  For example, as kidney failure is the most common aging problem in cats, the Jikei University School of Medicine is working on cultivating cat kidneys in pig embryos so that, in the future, elderly or infirm cats could undergo kidney transplants.

The technique used at Jikei, which involves injecting stem cells taken from a cat's bone marrow, was first developed for humans, but the researchers believe that in two years it will be available for cats for 50,000 yen - about 620 U.S. dollars.

The Mystery of Cats' Eyes And The Fascinating Way They Work
Ergonomic Pet Bowls? 15 Pet Bowls That Accommodate Your Pets' Special Needs For Dining Comfort