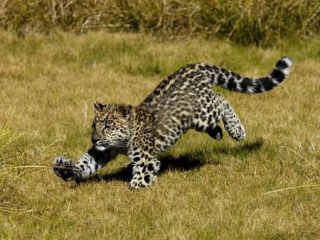 Baby jaguar in the wild: image via animals.desktopnexus.comA newborn Jaguar in Szeged, Hungary has had to be removed from his mother after two days because his mother is not capable of taking care of him.  She was also born in captivity.

The scene is not unusual in zoos.  Many animals bred in captivity do not recognize their babies as their own, so the babies must be hand-raised by humans, at least for a few months, until they can be re-introduced to their own mothers and other species members again.

Dolphins, whales, seals, and pandas are the most notoriously poor mothers in captivity, but so are many wild birds, and monkeys.  Bred in captivity themselves, they lack the instincts required to care for their offspring.  Even encouraging animals to mate in captivity is a challenge to zookeepers.

Animals need their sociieties to teach them how to behave, especially how to be parents - that's true of humans too.  When removed from their natural habitats, their families, and their peers, animals can lead very unfulfilling lives. Conservationists are admirably attempting to save the endangered species of this world - those that have been nearly wiped out by hunters and deforestation.  They are recreating environments, but they can't always afford to recreate societies.

6 Steps To Getting Your Dog Ready For A New Baby