Most of the cat sanctuaries in the world do not become tourist
attractions. Those that do have something unique about them, such as
being located in the ruins in Rome, or the former home of Ernest
Hemingway in 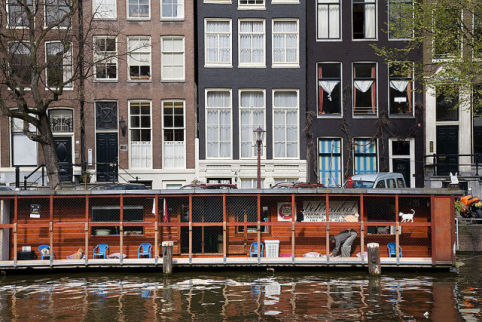 De Poezenboot (The Cat Boat) in Amersterdam (Photo by Jorge Royen/Creative Commons via Wikimedia)Florida. In Amsterdam the cat sanctuary that draws in the
tourist trade is located on a houseboat in the Western Canal Belt.

The
mixture of cats and water seems to be counter-intuitive, but that very
juxtaposition is exactly a part of the success of the sanctuary. The
cats don't seem to even notice the water, but they are well-protected
from any chance of taking an unexpected swim. 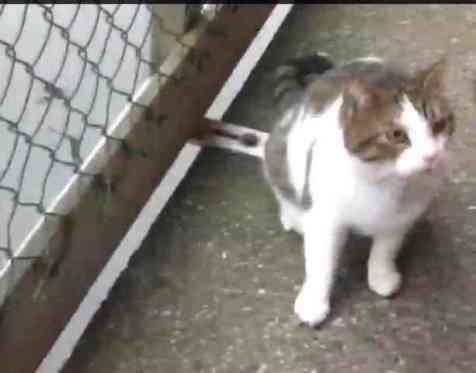 One of the Residents of De Poezenboot (You Tube Image)The sanctuary was
founded back in 1966 by Henriette van Weelde, something of a local
legend, who took in a stray mama cat and her kittens she found under a
tree across the street from her home. More stray cats joined them as
time went on. As space ran short in her home she eventually moved the
cats to a houseboat in the canal that she bought just for them.

In
1971 a second houseboat was purchased as the population continued to
grow. In 1979 the original 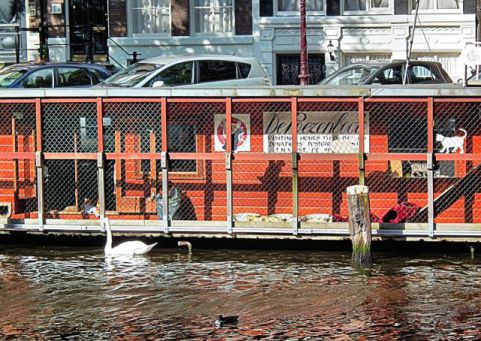 A Swan Checks Out the Cats on De Poezenboot (Photo by Microtoerisme/Creative Commons via Wikimedia)houseboat had to be retired and a new
houseboat, in a model appropriately called an "ark," was brought in to
do the duty of cat shelter. It was outfitted specifically for this duty
by a shipyard. The two boats are still moored in their original location
on the Singel canal.

In 1987 the status of the sanctuary became
official as the Stichting de Poezenboot, or Cat Boat Foundation. The
boats were subsequent overhauled to meet all modern shelter
requirements.

De Poezenboot is only open to the public for a few
hours a day so that the cats do not become stressed by too much going
on. The rest of the time they can just chill-out and be cats. This also
makes sure that the staff and volunteers have plenty of uninterrupted
time to clean up and provide excellent care.

Cats
Cute
Fun
Fun Stories
News Stories
Rescue
Weird, Odd or Bizarre
Time For Employees To Get Paw-ternity Leave?
This Cat Is Not Enjoying Taco Day! The BONUS Animal Video Of The Day!!!
From Splat The Cat, With Love