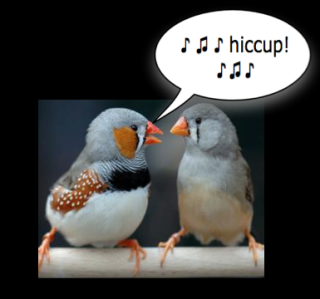 No, we’re not talking about that piano bar where you might catch a a group of inebriated celebrants drinking themselves silly while singing ‘100 Bottles of Beer on the Wall.’ No, in an authentic scientific study, researchers actually got a flock of zebra finches drunk in order to test their vibratos, under the influence!

Who Spiked the Punch?

In a study published last week in PLOS ONE, a research team from Oregon Health and Science University treated zebra finches to some alcohol-laden juice - but not because they were getting a jump on ringing in the New Year - instead they were testing these songbirds as to how they would sing with blood alcohol levels hovering around .08 percent, an amount exceedingly high by bird standards.

When considering how humans react to too much alcohol in their system, it’s understandable it would potentially change their sweet dulcet tones to a slurred delivery of sorts.

"At first we were thinking that they wouldn't drink on their own because, you know, a lot of animals just won't touch the stuff," researcher Christopher R. Olson told NPR, "But they seem to tolerate it pretty well and be somewhat willing to consume it."

The blood alcohol levels achieved — .05 to .08 percent — would be no challenge for drinking veterans like college students, but because birds metabolize alcohol differently, it was plenty to produce the effects the scientists were looking for.

Once sufficiently buzzed, “the most pronounced effects were decreased amplitude and increased entropy," the

researchers wrote in the study. So in other words, their songs got quieter and less organized.

The most amazing part of this field of study, in my estimation is how similar speech learning is for both humans and birds. in fact, in another similar report on bird genome, it was found that birdsong and human speech rely on the same genes. Because of this similarity, researchers will be able to use birds as lab subjects to better understand how speech in man evolved over the years.

Duke University neuroscientist Erich Jarvis and his team also explored how birds learned to sing specific song patterns. They determined a consistent set of around 50 genes that seem to correlate with vocal learning -- for instance -- if a gene was more active in humans, it was also more active in birds who could learn songs (and the same held true if the gene was less active).

But not all parts of the song were equally affected. Zebra finch songs are made up of specific syllables -- ones with distinct acoustic structures. And some of those syllables seemed to be more garbled in tipsy trillers than others.

The researchers think this might mean that alcohol affects certain parts of the birds' brain circuitry more profoundly than others, leading the sounds produced by that part of the brain to end up sounding more sloppy.

Warning: Don’t try this at Home

Further studies will explore that possibility, as well as whether or not alcohol consumption keeps birds from 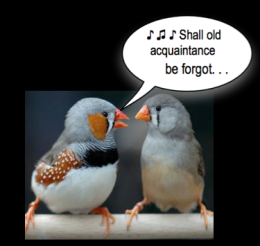 But as a precautionary note, we don't suggest you go on a bender with your bird any time soon, and please leave the alcohol a good distance from the cage this New Year’s Eve! Now, that the word is out, you don't want to be taking your feathered friend to Alcoholics Anonymous meetings in 2015! Leave those Silly Love Songs for human singers, like Sir Paul McCartney!

Less 'Birds Of A Feather' In North America Since 1970
Comments