When Toldo's owner passed away in September of 2011, Toldo followed the funeral procession from his home to the cemetery. He continued to visit the cemetery
every day for more than a year, even bringing small token 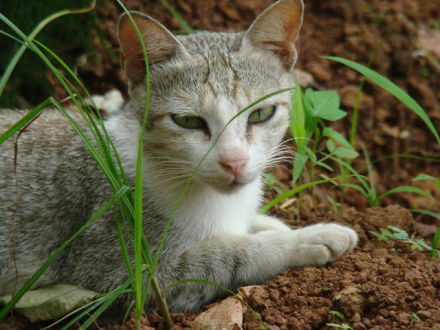 Cat (Public Domain Image) gifts to the
deceased man he had loved so much. His gifts mainly consist of such
things as twigs, leaves, sticks, paper cups, or paper towels. While the
meaning behind these gifts remain a mystery, the touching gesture of
enduring love is quite clear.

This sweet little drama has been playing out in Montagnana, in northern Italy. Three-year-old Toldo still lives with his owner's family. It was the day after the funeral that they noticed an acacia twig on the grave. The widow was the first to believe it was the cat. That evening the owner's grown son visited the grave and found Toldo standing guard on it.

Neighbors have seen the cat in the cemetery and leaving the gifts. Some people are not so accepting of a cat hanging around a cemetery and have tried throwing rocks at him to try to chase him away, but Toldo is made of sterner stuff.

Toldo doesn't go quite as often as he once did, though he still manages at least a brief visit every day. The winter cold has taken a toll when he caught a touch of bronchitis. He now spends more time sleeping with his owner's widow these days.

Cat Devils Beware, The Paws-Free Toilet Paper Cover Is Here! - Update
Welcome To My Mornings -- The Animal Video Of The Day!!!
PetsLady's Pick: Adorable Animal Of The Day