It Isn't Easy Being An Electric Green Tetra

Over the past decade fish that glow neon under a black light have become
increasingly popular in aquariums.  GloFish were created by Yorktown Technologies in 2003 by
adding genetic material from fluorescent coral to zebra fish. Since
then the genetically modified fish have been sold by the millions in a 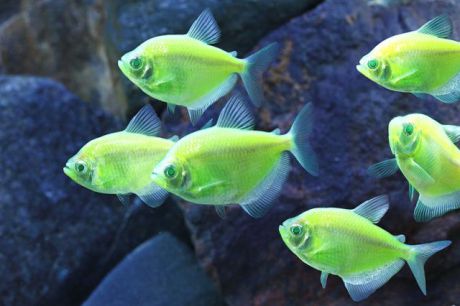 Electric Green Tetra (Photo by WWW.GloFish.com/Creative Commons via Wikimedia)rainbow of brilliant colors. Earlier this year they unveiled their
latest creation: the Electric Green Tetra. The problem is the concern these
fish will start
showing up in open waterways as so many other aquarium species have and their subsequent
impact on native species.

The Electric Green Tetra is a genetically modified black tetra and is the one of the two fish that is creating the greater amount of concern to the United States due to the fact that they are capable of living in freshwater and able to withstand colder water temps than their zebra cousins. The black tetra is from South America and would be most at home along the inter-coastal waterways in Florida. South Florida is already dealing with more than 30 species of non-native fish.

While black tetras have been found in Florida's waterways, there is no evidence of them being reproducing populations. Experts believe that they are eaten by larger fish. In one experiment the neon zebra GloFish were placed in a tank with large-mouthed bass and mosquito fish. The predator fish were more likely to eat the bright red zebra fish.

The controversy over Genetically Modified Organisms has already been raging for years as companies have been introducing them into food crops.