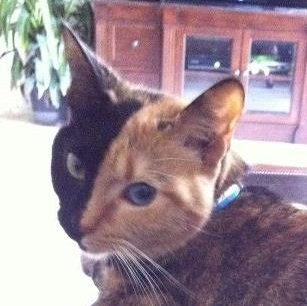 Venus began life on
a farm in North Carolina.  After seeing a
snapshot that included the farm cat and being struck by her odd features,
Veuns's current owners Chris and
Christina decided they had to open their Florida home to one more
cat.  She lived quietly as a loving and
beloved pet until Christina posted a page for her on Facebook and a friend
posted her picture on Reddit.  Her photos
quickly went viral, being shared by hundreds of thousands of social media users
within a week.  Once the photos became
famous, people began to suspect that the perfect line dividing two faces on the
same cat could not be real and must have been fabricated or enhanced on
Photoshop or her fur dyed. 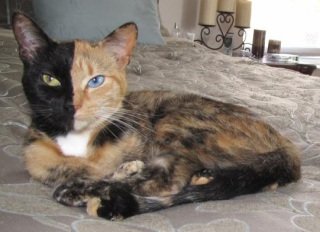 However, video and
older photos of the calico-tortoise shell mix shown on the Today show proves
her unusual coloring to be natural.  It
is suspected that the odd physical feature may be the genetic result of two
separately fertilized eggs that merged during very early development to form a
single organism from two zygotes, or very young embryos.  However, DNA testing has not been performed
to confirm this suspicion.

After her fifteen
minutes of fame,  Venus hopes to return
home to Florida.  However, it is also
rumored that the suddenly-famous kitty now has an agent who will help connect
Venus with animal rights non-profits who can use her fame and cuteness to
further the cause of animal rights.