Instructions For Stuffed Animals To Survive A Hurricane

When you live along the southern and eastern coastal regions of the
United States it is always advisable to have emergency plans in place
during hurricane season. These plans should cover what to do in case of 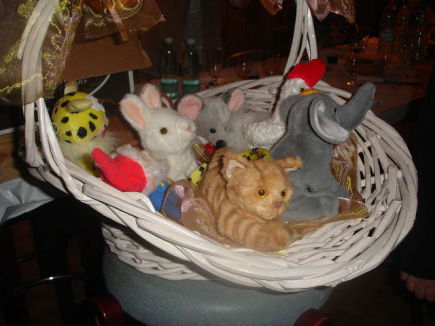 Stuffed Animals (Photo by Frachet/Creative Commons via Wikimedia)evacuation or in case of riding out the storm and should cover all
members of the family, be they human, pet, or . . . toy?

As Hurricane Isaac was bearing down on the Gulf Coast, 8-year-old Ashley Taylor and her family had to evacuate their home in Mandeville, Louisiana. She prepared for the evacuation as thoroughly as possible. Since there was no way for her stuffed animals to come with her, she wrote down a list of rules for them to follow in her absence. She wrote these rules on a white board so that all of the animals would be able to see the list.

Dad, Greg Taylor, found the list after the family had left and he had returned to check on the house and went into Ashley's room to feed her fish.  It is his feeling that the family has a future leader on their hands.

Even stuffed animals need someone to look after them.

Spice Up Easter With New Salt And Pepper Shakers