The Immigration Of Argentinean Monk Parrots Hoping For Green Cards

Immigration is not only a U.S. issue of extreme importance for the nation, over the course of the last forty years it's a case of deep concern for the monk parrots who have made Edgewater, New Jersey their home.

There are varying backstories as to how these subtropical neon-lime birds from Argentina - properly known as wild Quakers or monk parakeets - singled out Edgewater as the town they most like to immigrate to.

One woman who's identified herself simply as "Eliza D." in a Weirdnj.com blog claims her grandfather was the culprit. "My grandfather is the cause of those birds! In the late 1960's he became the Superintendent of an apartment building" and after breeding those parrots for several years unintentionally opened their cages allowing his pets an easy escape route through an open window.

Another source traces the birds' roots back to a shipment received at John F. Kennedy International Airport in the 1970s. When the transport crate broke open, the parrots sought out Edgewater which offered them plenty of grass seed from Veterans Fields and water from the Hudson River. Others dismiss this possibility indicating that those birds took up residency in Brooklyn, New York (but that's another story). 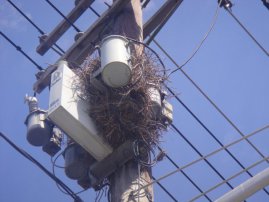 In any event, today the monk parrots of Edgewater multiplying into the hundreds seem to have a preference for utility poles as nesting sites. They specifically see out areas beneath the transformers drawn by the warmth they generate, particularly during the harsh winters and heavy winds blowing in from the Hudson. Hence the issue with immigration.

Kristine Snodgrass, a spokeswoman for PSE&G, said the nests can reduce airflow around the equipment, which can become dangerous over time. "When there's a lot of demand and the equipment heats up, there's no circulation," she said. That can lead to short-circuiting and outages — a four-hour outage in Leonia, Englewood Cliffs and Teaneck in December, 2012 "was attributed to a Quaker nest," Snodgrass said.

Don TorinoEven those you'd think would be sympathetic to the cause have rejected the idea of giving the parrots Edgewaterian citizenship because they're considered an alien species. "They're technically an illegal pest,” even though there’s no evidence that they endanger the state’s agriculture, said Don Torino, education chairperson of the Bergen County Audubon Society.

Those that support open immigration for the birds think otherwise. “Most people are for the birds,” says Alison

Hoping to get “green cards for the green ’keets,” Evans-Fragale spearheaded a drive to have the birds de-listed as a potentially dangerous species. “Any of the birds living here now were born here,” she says. A bill to de-list the parrots, A454, is currently before the New Jersey State Assembly.

Evans-Fragale’s group also works diligently with PSE&G and local residents to aid in the removal of troublesome nests only before breeding or after fledgling season, and in constructing alternate nesting platforms.

Hopefully the issue will be resolved in the short term (after all, 40 years is a long time to wait for citizenship). But, as far as even considering relocation, as Mary Ann Castronovo Fusco put it in her New Jersey Monthly feature, "with that Manhattan view and easy access to cannoli crumbs, who’d want to move?"

Let's just hope there's enough birds of a feather in the State Assembly who can flock together and award these 'keets with those much over-due green cards! 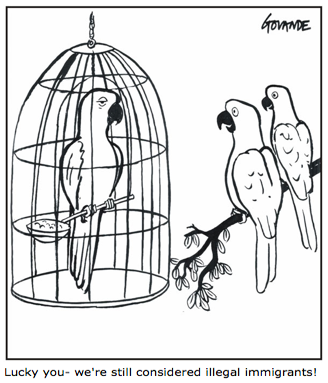 How To Care For Your Wild Birds Through The Winter Season