If "Jesus Lizards" Came First, Might Walking On Water Already Been A Miracle? [Videos]

Not to be sacrilegious, but if a lizard first appeared on the planet before the Old Testament and Jesus Christ 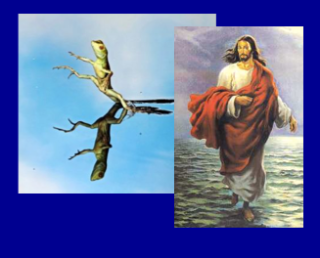 didn't walk the earth (let alone water) until the New Testament, why is the common basilisk lizard named after him? It's true, while we still don't know what came first, the chicken or the egg, we do know hat "Jesus Lizards" predated the Son of God.

Faith in Not Drowning

However similar to the Biblical miracle of Jesus walking on water, Jesus Lizards do demonstrate  the importance of faith and an innate control over nature. And, leaping lizards, if the basilisk hadn't already perfected that unique skill a million or so years prior to the Last Supper.

As a means to flee from its predators, these fleet-of-foot tree-dwelling creatures are able to gather sufficient momentum to virtually run across the top of a body of water at will.

Hailing from Central America, these lizards range in size from less than 0.01 ounces (2 grams) upon hatching to just a little more than 7 ounces (200 grams) when they are full-grown adults. According to behavioral research, they can glide across water on their hind limbs at about 5 feet (1.5 meters) a second for a distance of approximately 15 feet (4.5 meters) before they sink to all fours and swim. 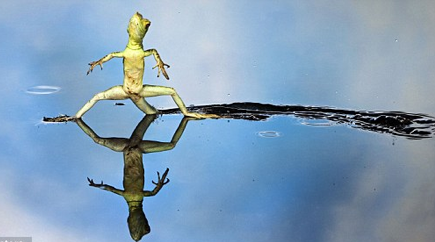 The Australian Reptile Park encourages responsible pet ownership. Because reptiles have very different requirements to those of most traditional pets, you will need to consider some important issues. Without an appropriate level of preparation and commitment, the novelty factor will soon wear off, with the likely outcome being a neglected animal and a disappointed owner.

It's been said that these lizards don't make good pets because they
prefer freedom they have in the wild. However if you're interested in
raising them, you'll need to  acquire a water enclosure like a swimming
pool or aquarium filled with a minimum of 55 gallons of water.

The
Basilisk Lizard will do best with 12 hours of dark and 12 hours of
light, with temperatures averaging 85 degrees in the day time and 70
degrees at night.

As far as Australian lizards, it appears that there's one lizard that gets even more attention than the Jesus Lizards.  A previous president's daughter was so impressed with one species, she was hired by NBC to interview the reptile who while he hadn't mastered the ability to walk on water, he certainly knew how to give a good interview!

Animal Videos of the Day
Fun Stories
Funny
Lizards
News Stories
Weird, Odd or Bizarre
Are Bugs to Blame for Ghost Sightings?: Animal Video of the Day!
The "Happy Pig Day!" Animal Video Of The Day!!!

Could A Squirrel Morph Into A Cat?

Surfing Dolphins! The Animal Video Of The Day!!!
Comments