Dogs have been subjects of laboratory research for a long time, sometimes in studies that were harmful to them.  But neuroscientist Greg Berns from Emory University doesn't want to harm dogs; he and his fellow researchers just want to see how dogs think. 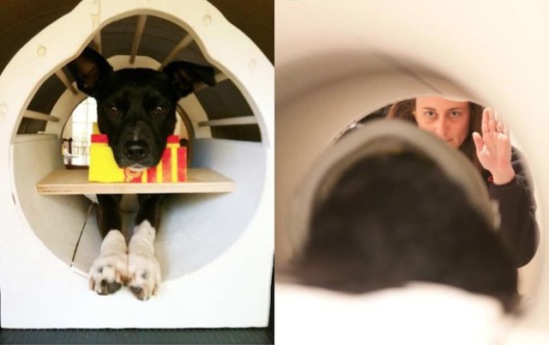 Recently, Berns and his colleagues conducted a brain scan study of two dogs in a short test that showed their cognitive function as they anticipated rewards from their owners. Before the tests could even take place, however, the dogs were trained for a period of eight months to stay still in the fMRI (functional magnetic resonance imaging) machine, while wearing noise-cancelling headphones over their ears.

The research was successful in what it set out to do: 1) to see if the dogs could be trained to be still, unrestrained, in the machine during the short action of the fMRI machines; and 2) to obtain scans showing the images of the dogs' brains in response to the anticipation of treats. 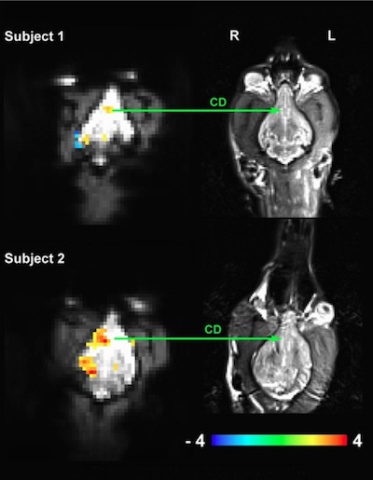 Berns suggests that because dogs are more domesticated than monkeys and they are used to humans and their environments, they might be more suitable for cognitive testing.  Some of the areas of research Berns suggests are whether dogs understand the language of commands or are their responses related to non-verbal cues, such as vocal inflection or gestures, or facial expression. What part(s) of the brain represent humans, or other dogs?  What about dog empathy?  Do dogs really know how their humans feel?

No doubt, hundreds of research possibilities will be opened by this first experiment in testing dogs on fMRI.  The researchers should be congratulated, not only for their success, but for their training protocol, using only positive reinforcement to train the study's dogs.

Functional MRI In Awake, Unrestrained Dogs is published online and can be downloaded at the Social Science Research Network SSRN.  (via wired.com)

PetsLady's Pick: Surprising Climbing Goats Of The Day
Who Knew That Armaillos Love Taking a Bath? The Animal Video of the Day!!!
Comments