How To Tell If Your Dog Is Pregnant

A pregnant dog will begin to show noticeable changes psychologically and physically. By learning these signs, you won't end up with any surprise litters of puppies. 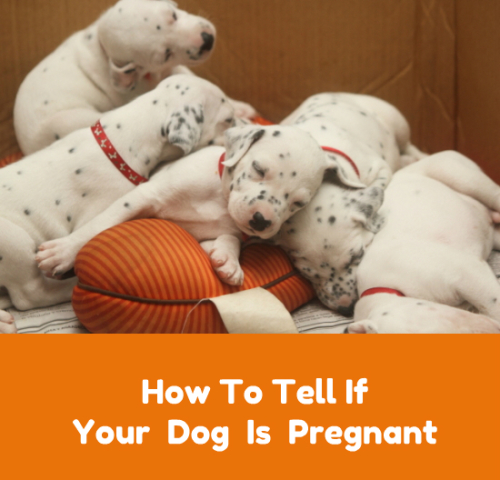 Here are some of the earliest pregnancy signs your dog will begin to show.

One of the earliest signs of pregnancy is a noticeable lack of appetite. This can be most closely described as a dog version of morning sickness. Not every dog goes through this, however, if your dog does don't try to force her to eat. There's no harm in tempting her with some good healthy food, such as beef, but if she doesn't eat it try not to panic. If she doesn't eat for more than three days, consider giving your vet a call.

Your dog may seem exhausted or lethargic upon getting pregnant. This has to do with your pup's changing hormone levels to support her new babies.

Change In Nipple Size And Color

Your dog's nipples will change and develop as her body prepares for pregnancy. Some indicators include some growth in the breast area and nipples roughly two weeks after conception. Nipple color will change as well to have a slightly more pink tone, particularly towards your pup's hind legs.

Almost every dog will show behavioral changes. Depending on the dog, she could become more affectionate and clingy, or more distant, preferring to be alone.

As your dog gets further into her pregnancy, certain behaviors will begin to change. 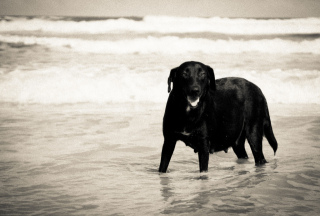 As your dog moves later into the pregnancy, her appetite will not only return, but increase. It's okay to allow your dog a little more food during this time, but be sure not to overfeed her. You just want to give her enough to provide the nutrition she needs to keep her developing pups nice and healthy. Sometimes it's recommended to keep food available to your pup at all times during pregnancy. However, this varies with every dog, so talk to your veterinarian to determine the best foods for your pregnant dog.

You may notice a thickening of your dog's abdomen, but a quick examination will reveal that the fattening area is actually firm to the touch. This occurs about a month after conception, and her abdomen will continue to grow until the pregnancy is over.

As your dog enters the final stages of her pregnancy, some of the most noticeable changes can occur. 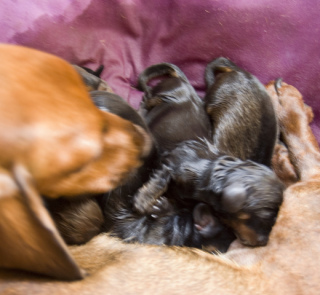 Puppies Lactating Just After Being Born: Image by Auteur, Flickr

Later in the pregnancy, you'll be able to detect more than just a large abdomen. Now, if you touch your dog's tummy, you may actually detect movement. Depending on the size of her litter, it should be larger and firmer than what could be seen earlier in her pregnancy. The closer your pup is to giving birth, there will be a definite increase in movement as well.

The first signs of milk will begin to show as your dog comes close to giving birth. Some milk can be gently expressed from the nipples, and may even begin to drip occasionally.

Finally, your dog will show nesting behaviors as it comes time to give birth, usually 24-48 hours beforehand. Your dog may appear restless, and might start preparing an area of the home with newspapers or wadded up blankets. It may be a good idea to prepare an area of the home for her that she can use with some old blankets in a cozy box or corner. If you don't, she's likely to choose an area on her own.

By recognizing pregnancy signs, you can provide your dog with the care she deserves. Keep an eye on her during pregnancy so you'll have an idea when she's going to give birth.

Also Read: Signs That Your Cat Might Be Pregnant

Poop Bags: Which Ones Are Really Biodegradable?
International Animal Rescue: Help Save Little Gito And Other Animals!
Comments