How Safe Are Petting Zoos? 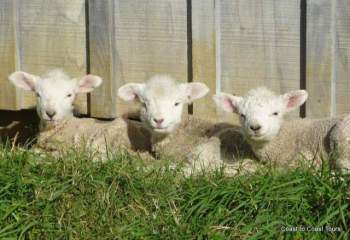 Unless you grew up on a farm -- and most of us didn't -- you've probably never hugged a cow.  Or rubbed noses with a goat.  Petting zoos have changed all that for lots of city kids, children living in the suburbs and even kids from rural areas.  These miniature traveling farms provide an opportunity to get up close and personal with a furry animal that isn't a cat or a dog.

Petting zoos are everywhere from the parking lot of the local church bazaar, to volunteer firemen fairs, community carnivals, inside shopping malls, and yes, even as part of the display at full-fledged zoos.  The are absolutely great when it comes to allowing children and parents to see and touch some of the animals they read about in storybooks and see on TV programs.

And they are also absolutely dirty, even the clean ones.  Think barnyard kind of dirty.  In a typical petting zoo, farm animals, usually baby animals, are kept in an enclosure of some sort, with the floor covered with straw.  Problem is, the cute little babies eat and drink and then do what comes naturally on the floor.  No matter how quick the petting zoo operators are to clean up after them, it's not always fast enough.   The animals walk in it, lie down in it and nuzzle their noses and mouths in it as they eat. The better operators keep replacing the straw along with the clean-up, but some dirt always gets missed.

So what's the big deal?  Well, farm animals carry bacteria and other organisms harmful to people.  These orgasms are spread through animal feces and can make children and adults sick for a day or a couple of days.  But there are some illnesses that can be more serious.

A strain of E. coli bacteria, for example, can be transferred to people through animal feces.  Severe nausea and vomiting, stomach cramping, and bloody diarrhea can result, expecially to children and elderly people. Recovery usually takes about a week or so, but some people develop other problems severe enough to require dialysis and blood transfusions,according to WebMD.

Does this mean you should avoid taking your child to a petting zoo?  No, but it does mean you need to be aware that petting zoos are settings where harmful organisms and bacteria, such as E. coli, may be present and you need to take appropriate precautions so your children do not become infected.  Here are some safety tips about petting zoos from WebMD that you need to know.

Look the petting zoo over carefully, before you send your children inside. If the enclosure or the animals look dirty, don't go in.  You can see the animals from outside the fence.  Walk away.

Never take food into the enclosure.  Sharing an ice cream cone with a baby animal is a real bad idea.  First of all, many animals are going to be attracted by the smell of whatever your child is eating.  They are not going to be hard to feed.  Smaller children, especially, are going to find it hard to resist offering what they are eating to the animals.  Avoiding contact with the animal's nose and mouth is going to be difficult, if not impossible. Remember, the baby animal your child wants to feed may have just nuzzled some crap in the straw and now its lips, snout and tongue are contaminated.  Then, too, the petting zoo operators are not going to want anyone feeding their animals people food.  Many of these zoos have special food that you can purchase to feed the animals.

Don't touch your mouth, nose, or eyes.  Right, like that's probably going happen.  Kids put stuff in their mouths.  The touch their faces.  We all do it.  And that is how many colds and viruses are spread from one person to another or, in this case, from an animal to a person.  But this is something worth talking about and it's really worth watching for while your child is in the petting zoo chasing after calves, lambs and other animals.  It's also why you need to be vigilant the whole time your kiddo is inside the enclosure.

Wash your hands!  This is the single most important thing you can do for your child when he or she comes  out of the petting zoo enclosure.  Good old fashioned soap and water work best.  Look for a restroom or handwashing station.  But, if that's not possible, go ahead and use an antibacterial soap that doesn't require water.   As a last resort,use a moist towellette that comes sealed in one of  those little packages.  It's better than doing nothing.

"You stepped in what?"  This one is pretty obvious.   Walking around inside an enclosure with a bunch of farm animals means that you or your little ones will probably step in poop.  It may be hidden under some straw of you just may step backward into a pile of it.  Whatever.  It's going to happen.  It's going to get stuck in those fancy treads on your running shoes and it will get walked right into your car for the ride home.  Then, it will get tracked into the house.

Check shoes before everyone climbs into the family auto.  If you spot anything suspicious, don't try to clean it off.  Just remove the shoes, place them in a plastic bag and toss them in the trunk.  Clean them when you get home and can do a thorough job.

Bring a change of clothes.  I know, I know.  Like you don't already have enough to haul around with the portable stroller, hats and sweatshirts, sunscreen, bottled water and snacks.   But kids do like to hug baby animals and that's how animal feces gets transferred onto shirts and trousers.  Then, children touch their clothes and later touch their mouths.   Carrying extra clothes is worth the effort.

Bottom line.  Petting zoos are great places for kids.  They get to bond with a baby animal other than a cat or a dog. Children learn about animals they rarely see in person, so the facilities also are educational.  The problem is they also are dirty, just like farm animals are dirty.  Harmful organisms and bacteria spread by the cute baby animals can make you and your children sick, sometimes, seriously ill.  This doesn't mean you should avoid petting zoos.  But it does mean you do need to take some precautions when you visit one.