How Not To Catch A Salmon

There are a number of ways to go about catching salmon -- with a fishing
pole, with a net, with a spear. Some people will even resort to
throwing explosives into the water. Last Sunday a man in Washington
State brought the activity to a new low when he accidentally shot
himself while hunting for salmon on the Deschutes River 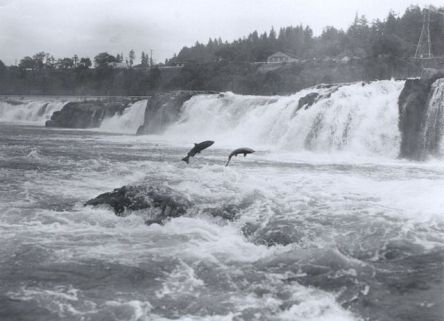 The man, whose name was not released to protect his idiocy, saw what he decided should be dinner and took aim with his .22 caliber rifle. He fired, missing the fish, but not the rocks nearby. The shot ricocheted and hit him in the head.

While he declined to be interviewed by the local press, his mother-in-law, who must have been questioning her daughter's taste in men, commented that it was lucky he wasn't killed. However, he is likely to lose the sight in one eye.

A spokesman for the Thurston County Sheriff's Department commented that fishing with a rifle was not acceptable (ya think?) and is, in fact, illegal. The state Department of Fish and Wildlife is joining the investigation into the incident.