How Ripple The Weather Dog Found A Home

Weatherman Mike Sobel of Global News, Edmonton, Alberta, Canada, has
been bringing shelter dogs on the air with him for the past 15 years to
promote adoption got a little more than he bargained for last week. He
invited Ripple, a mastiff mix, to join him on the air. Ripple was very
excited and his performance, or rather lack thereof, has made him a
media sensation. It also found the rambunctious dog a home. 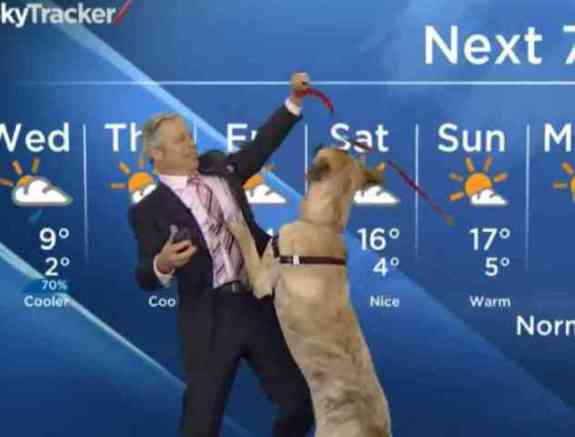 Ripple playing with Mike Sobel on the air (You Tube Image)

Sobel went on the air with a very energetic dog. He tried to get Ripple to sit, but the dog was just having too much fun having someone to play with. Ripple was bounding and bouncing, and chewing at the leash. He tried to pull Sobel off his feet and off camera a couple of times. Ripple chewed all the way through the leash, making Sobel laugh as he held up his now limp end of the leash. It was hilarious -- if you haven't seen the video, the check it out below.

"The bottom line was ... I wanted to get that dog adopted," Sobel told Global News of his determination to keep Ripple onscreen and in focus.

At that time Ripple was in the care of the Edmonton Humane Society. After the incident they changed his profile on their website to report that despite his new found celebrity he was still the down to earth dog that he always was. 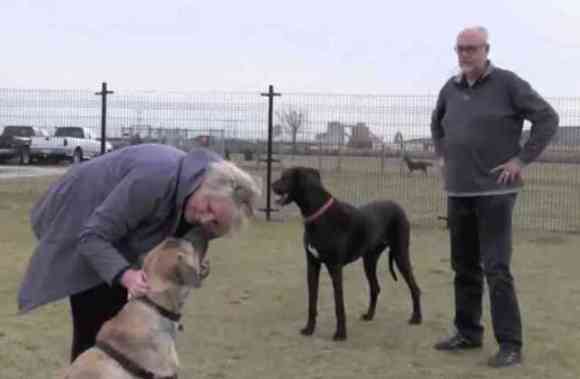 Ripple and his new family (You Tube Image)

Little did he know at the time, Ripple's bad television manners got him enough attention to get him a forever home. Dennis and Susan Paulsen had seen his performance and knew that he was just the dog for them. He strongly resembled a dog that they lost recently.

On Tuesday they signed the adoption papers and introduced Ripple to his new sister, a Great Dane named Zoe. The two dogs took to each other immediately. Zoe had been lonesome after the passing of her old friend and will now get a lot more entertainment and exercise with her new brother.

The Paulsens admitted that Ripple seems a bit out of control, but it is nothing they aren't used too. They have been parenting dogs for many years.

For Sobel it is a story that he will be telling for years to come and, at least in the case of Ripple, mission accomplished.

Cute
Dogs
Fun
Funny
News Stories
Weird, Odd or Bizarre
Clean Up Your Dog’s Act With Eco-Friendly, Organic & Gentle Dog Shampoo From Organic Oscar
Your Dog Needs A Leotard! Wait! What?
PetsLady's Pick: Gorgeous Snow Horses Of The Day
Who's Da Brave Guard Dog? You Are! Yes, You Are! The Animal Video Of The Day!!!
Comments