How The KLM Airlines Dog Fooled The World

KLM, the Dutch airline, released a video last month that showed a
handsome and dashing beagle running the airport on a mission to return
lost items to their owners. It is a fun romp as he races past security,
trains to keep in shape, and mingles with the passengers and airline
employees. The adorable dog is welcomed everywhere he goes and brightens
everyone's day. There's just one problem. . . 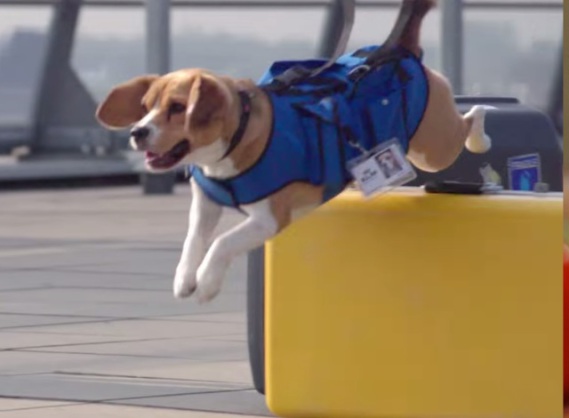 The KLM Airline Dog in Action (You Tube Image)

It's a fake. Yep. Cute as it is, it isn't real. Really. A lot of people apparently got taken in. Perhaps because it seemed like a dream come true to have someone of any species to be that considerate of your lost belongings anywhere in the airline industry. It hit amid many reports in the U.S. about airline employees mishandling and looting passenger baggage.

The perky pup turned out to be a sort of palliative for the travelling masses -- the idea of an airline going to the extreme of hiring and training a dog to return lost items to passengers. This is especially believable since there is a scene in the video of the pooch, named Sherlock, going through training. 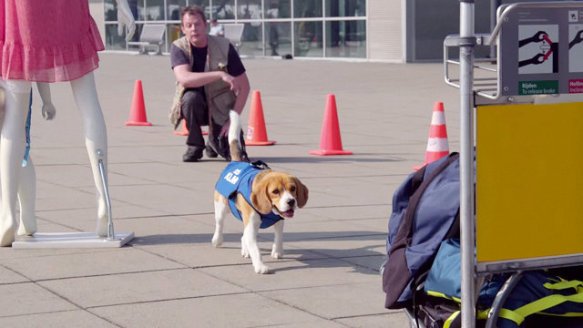 The KLM Airline Dog in Training (You Tube Image)

Numerous news organizations, including CNN and the Huffington Post, reported that the video was real and that KLM had come up with the cutest lost and found service in the world. Indeed, the video does a very convincing job of making is seem that way, but it is all marketing. Some news organizations called it a "fake" marketing stunt. No indeed. It was a real marketing stunt. The only fake part is that Sherlock works publicity not lost and found -- and he is very good at it.

The truth is that the real human lost and found team at KLM has been known to track down passengers to return items that they had accidentally left behind. The advertising agency took that detail and put a cuddly canine face on it. 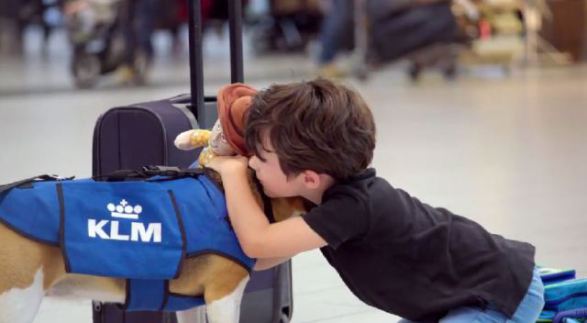 The KLM Airline Dog Receiving a Thank You (You Tube Image)

The marketing team that came up with Sherlock has probably made their careers. The press, both good and bad, has gotten this video further in the public's mind than just your standard commercial. Let's face it. People love dogs. They love clever and helpful dogs. Most of all they seem to like the idea of dogs coming to the rescue in our daily lives.

If you were taken in, then you are like me -- dreaming of a better world filled with cute, well-trained dogs will help you find your cell phone. It is too good to be true, but we can all dream, can't we?

Mischief the Talking Raven -- The Animal Video of the Day!!!
Comments