How Do You Take A Tortoise For A Walk? Very Slowly

When Japanese funeral director Mitani Hisao first met Bon-Chan, an
African Spurred Tortoise, the reptile was just about two inches in size.
Hisao's wife discovered the tiny tortoise at a pet store. There was an
instant connection between the two. Now, 19 years later, the man and his
tortoise are a common sight in their Tokyo neighborhood as they take
walks together -- very slowly. 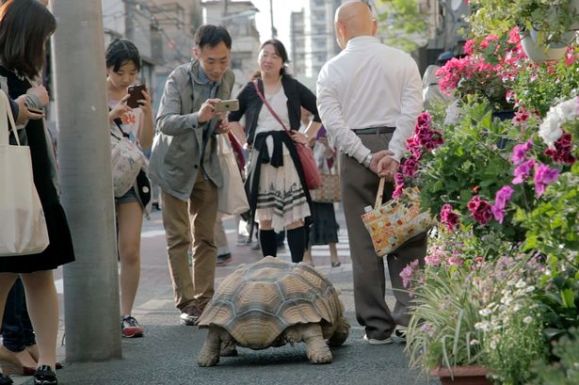 Hisao and Bon-chan Out for a Walk (Image via Mirror)

Bon-chan has grown to a very healthy two and a half feet in diameter. Hisao never thought that he would grow to be that large. But the tortoise has become the child he never had and is happy to refer to the reptile as his son. He jokes that Bon-chan is the only one in the family that listens to him so he tells him everything.

Hisao sets off on these walks well-prepared as a good pet owner. He carries a bag that contains carrots and cabbage for tortoise snacks, a plastic bag for scooping up poop, and a bottle of water for washing pee off the sidewalk as necessary. 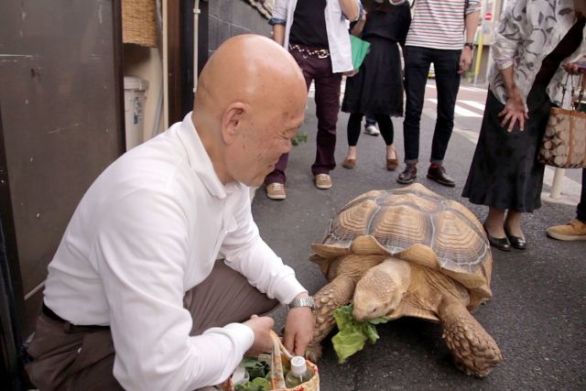 The pair goes for walks two to three times a week. Bon-chan has a set route that takes them an hour and a half to two hours to complete. The tortoise knows the route by heart, so Hisao lets him take the lead. Bon-chan is also all male and has a tendency to start following a pretty girl walking by.

Bon-chan also helps out at the funeral home, according to Hisao. People arrive sad to make arrangements for their lost loved ones, but cheer up once they see the tortoise and get to interact with him. He is a reminder that there is still something to smile about in the world. 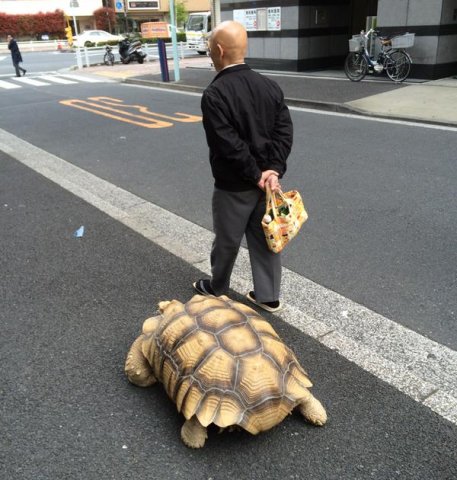 Hisao and Bon-chan Out for a Walk (Image via Rocket24)

During the winter the pair will also wear matching homemade outfits to ward off the cold. This does render Bon-chan's appearance to look more like a walking cushion, but he doesn't seem to mind.

Hisao and Bon-chan have gone from being locally famous to an internet sensation -- and with good reason. After all, it isn't every day that most of us see a man walking his tortoise.