There are times when animals just can't help but get caught up in the
absurd dramas of the human race. Such was the case on Monday when
authorities tried to stop a man for riding a horse through a town in
northeast Florida while drunk. To add insult to injury, the local
headline read as though it was the horse who was drunk, not the rider. 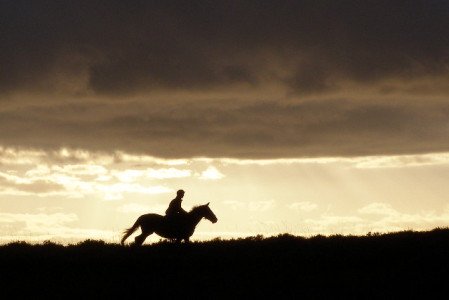 Horse and Rider (Photo by Jim Champion/Creative Commons via Wikimedia)

When a police car approached the man with lights flashing, they ordered Charles Cowart, 29, to dismount. Cowart claimed that he was on his way to his grandmother's house, but refused to leave the saddle. Instead he pulled back enough to make the horse rear and take off at a gallop. Police did not immediately give chase, citing their concerns for public safety and the horse's well-being.

Cowart continued to tear drunkenly through town while crowds gathered to watch the spectacle. The police followed at a safe distance, choosing to use only flashing lights so as not to further alarm the horse with the use of sirens. Cowart refused to adhere to repeated requests to dismount.

The chase continued for a half an hour, until the horse was exhausted and Cowart took off on foot. He was apprehended a short time later and booked into the Flagler County Jail. He is being charged with disorderly conduct, resisting arrest, and cruelty to animals. The horse has been returned to his family and is said to be doing well.

Cowart had previously been charged with a DUI in October of 2010.

One thing is fairly certain -- grandma must be so proud that he dragged her into this and probably more than a little relieved that he never made it to her house in that condition.