Hero Chicken Is No Dumb Cluck

It is the sort of story you hear about dogs, cats, or even toddlers, but
it isn't one common to chickens. At a home in Wisconsin, in the
pre-dawn hours of Thursday morning, a couple was awakened by their pet
chicken 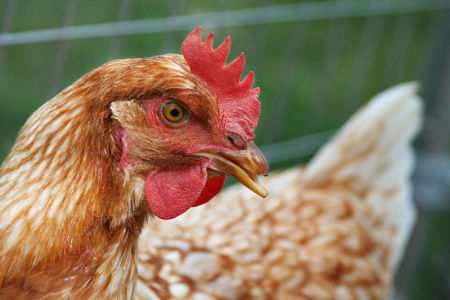 Chicken (Photo by Thegreenj/Creative Commons via Wikimedia)alerting them to the fact that the house was on fire. The
couple, one cat, and the chicken were able to escape unhurt. Another cat
was not able to escape and died in the blaze.

The chicken, known by the name of Cluck Cluck, originally came from a neighboring farm. Dennis Murawska took pity on the chicken when the farmer talked of killing her because she didn't lay any eggs and adopted her instead. It was from her cage in the basement of the Murawska home that she sensed the fire in the attic and raised a commotion until Murawska and his wife heard her from the second floor and got up to investigate the problem.

The house ended up being completely destroyed, but the Murawskas have a wayward chicken with one bad foot to thank for still being alive and well. Perhaps Cluck Cluck felt that same way about them and wanted to repay their kindness. Murawska admitted that he had probably spent too much on the bird, having built her both an outdoor and indoor coop, but in hindsight, it was an excellent investment.