Puppy Wiggles Out Of Hawk's Talons And Falls Into New Home 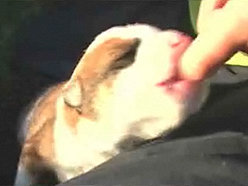 Puppy, dropped by a hawk: image KSEE24 News via cnews.canoe.com

The hawk circled and circled around the yard, no doubt trying to find a way to dive down and retrieve the newborn puppy that had just wiggled out of his talons. To Elaine Bouschard of Los Banos, CA, and her grandson, it was a puppy from heaven.

"I looked up and the hawk was just flying right here, circling around, and at that point we all just went to the puppy," Bouschard told the NBC News affiliate in Fresno, California.

The puppy, which was immediately adopted by Bouschard and her grandson, was dropped an estimated 30 feet from the ground and bounced off the ground when he hit.  Fortunately, he was small enough to survive the fall.  Indeed, he doesn't look more than a few days old in this interview on May 15.  Because the pup had just opened his eyes for the first time, Bouschard estimated he was about 8 weeks old, but actually dogs open their eyes when they are only one to two weeks old.

This means the pup was literally robbed from his 'cradle.' Think of how shocked his poor mom must have been to have her pup stolen by a hawk!  And he was definitely taken by a hawk....

"This puppy has a lot of wiggle in him," Bouschard told the interviewer as she pointed out three distinct long talon marks on the pup's tiny body.

The puppy that fell from the hawk was given the name TJ Heavenly. "My thought is that when God drops a puppy from the sky, you keep it,"
Bouschard said.

KSEE24 News via CNews  Many thanks to my colleague Steve for the tip!