Weird?  Well, there are weirder things in politics these days.  But this is true: Hank the cat is running for  U.S. Senate in Virginia.  Born and bred in Fairfax, VA, Hank believes he understands the workings of nearby Washington, DC at least as well as his opponents, both former governors of Virginia, George Allen and Tim Kaine.

Having pulled himself up by his puss'n bootstraps, Hank started with nothing, not even a home to call his own. After putting himself through school, and dedicating himself to providing jobs while running several companies, Hank is ready to serve his state and his country and to help the creation of jobs, spaying and neutering of pets, and making politics more civil - starting with his community and moving outward to the country. 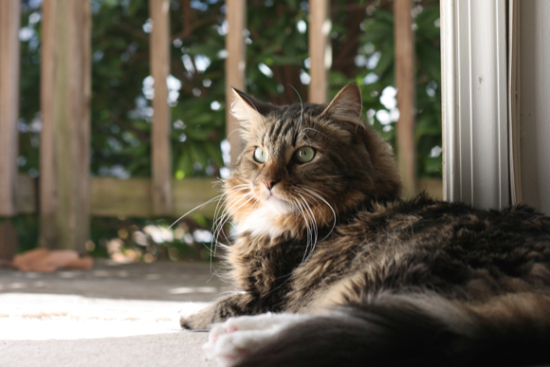 Hank leaves his opponents out in the cold when it comes to social media. He's got Twitter and Facebook fans from all over the world, partly due to his recent world-wide good will tour.  Some international reporters have even visited him at home.  Check out this video made by a reporter from Japanese TV station FNN, interviewing  the first and only cat running for senate in the U.S.

Hank has no PAC or wealthy donor behind him; he is totally self-funded.  Even his Vote Hank bumper stickers are sold at his cost.  He doesn't want one cent from anyone, but there are ways you can help get him elected...

What You Can Do To Help Hank Get Elected

1.  Write letters to the editor of Hank's Virginia and D.C. newspapers.  Hank has the email addresses on his campaign website. He's even written a letter for you!

2. Volunteer for the grassroots campaign if you live in Virginia.  You can go door-to-door canvassing, work in a polling place on election day, or handle a phone bank.

4. Help spread the word about Hank.  Tell your Facebook friends and Twitter followers what Hank stands for. Of course, Hank even prepared a sample letter for you to send.

2019 Halloween Costumes For Our Pets

Have Yourself A Crazy Little Cat Christmas
Comments