Hammer Time: A Cat From Iraq

Cats are a wonderful source of comfort and support in difficult times
and they can earn their keep by hunting down vermin. For one U.S. Army
unit in Iraq a tiny kitten born on their base was just such a helpmate.
He kept mice out of the soldiers' living quarters and mess. He comforted them as they comforted him. Out of his
litter he was the only one who stuck around to become one of "the guys." 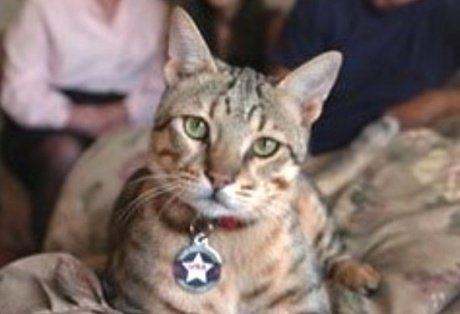 The cat, dubbed Pfc. Hammer, experienced the war right alongside the soldiers. He jumped at the sound of nearby gunfire and unexpected explosions when they did. He would always take the soldiers' minds off of the war at just the right time.

During a mortar attack on the unit Hammer ran to the bunker with everyone else. The nearest soldier picked up the cat and tucked the feline inside his body armor for safe keeping until the attack was over.

When the unit's deployment was over and it was time to return to their home base at Fort Carson, Colorado, they wanted to make sure that the entire unit made it home -- and that included their furry little Hammer.

Staff Sgt. Rick Bousfield, with the help of numerous volunteers and two animal welfare groups (Alley Cat Allies and Military Mascots) worked to make sure that Hammer was transported to his new home in Colorado. They worked with a veterinary unit in Kuwait to get the cat on an international flight. He was also neutered and given a clean bill of health before making his journey. 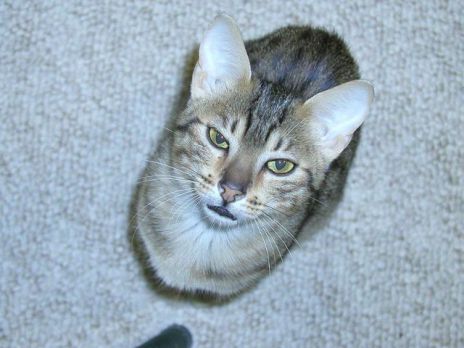 An Egyptian Mau (Photo by Malcolm Gin/Creative Comons via Wikimedia)Bousfield arrived home in early April 2004. Hammer joined him about a week later. Bousfield, his daughter Tiffany, and Sgt. Robert Scott were all waiting for Hammer when he arrived at Denver International Airport. As soon as Hammer heard Bousfield's voice he started purring and kneading the arm of his traveling companion (an Alley Cat Allies volunteer who had accompanied him from San Francisco to Denver). In spite of the trauma of travel he still recognized his friend.

Hammer, now identified as an Egyptian Mau, was reunited with his unit and now lives in the Bousfield home with five other cats. He has retired from his army career to pursue a new career as a house pet. It is a life for which he is well-suited and one he so richly deserves.