Guppies And The Value Of Ugly Friends

Researchers at Italy's University of Padua have found that guppies find
true value in hanging out with ugly friends. It is all part of a natural
selection process that the fish use to ensure procreation and the
survival of the 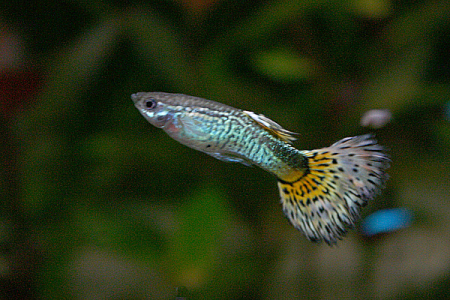 Guppy (Public Domain Image) species. No male wants to face a lot of tough
competition when he can look like Prince Charming among the dwarfs.

According to an article published this week by Britain's Royal Society male guppies  purposely position themselves among drabber, less colorful comrades to get the girl.

In a guppy version of The Bachelorette, the researchers placed two females into a tank, each at a separate end behind partitions. With one female they placed two handsome, brightly colored males. The other female had two drably colored males placed with her.

The bachelor guppy was then placed in the middle of the tank and allowed to choose between the females. Each time the test was run, the guppy spent 62% of his time at the end of the tank with the ugly guys. Apparently even guppies know that they look better by hanging out in a group uglier and less desirable than him.

It is hard not to think about how this translates into humans. So, guys, would you rather compete with Danny DeVito or Brad Pitt for a woman's attention? You make the call.