Gulf Of Mexico Being Invaded By Lionfish

An invasive population of lionfish is exploding in the Gulf of Mexico
and the fact has scientists alarmed. This concern stems from the fact
that lionfish don't belong in the Gulf, the Caribbean, or even the
Atlantic. These 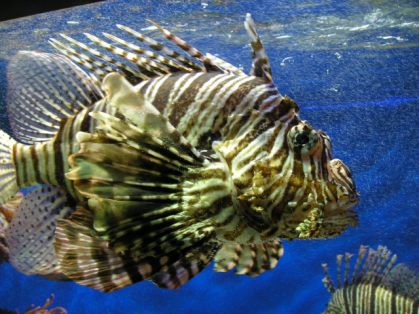 Lionfish (Photo by Keith Schengili-Roberts/Creative Commons via Wikimedia) fish belong half a world away -- in the Pacific. On this
side of the planet they have no natural predators to help control the
population.

The lionfish is so named because of its many flamboyant fins that give the appearance of the fish having a mane. They also sport  spiky fin rays that are venomous. They are popular aquarium fish and scientists believe that this is where the lionfish in the area originated. Six lionfish escaped in South Florida during hurricane Andrew in 1992. Other theories include aquarium owners who, tired of the fish in their aquariums, "humanely" released the fish into the ocean. Unwanted aquarium fish should always be returned to the dealer.

The fish are now found along the Atlantic coast from Florida to North Carolina, throughout Bermuda, the Bahamas, and Cuba. They also found in the Florida Keys and now the Gulf. They live along coral, rock, and artificial reefs in these areas. Divers and fishermen should be on the alert for the lionfish to avoid becoming stung by the poisonous spines.

Lionfish have big mouths and are able to swallow fish almost as large as themselves. That, coupled with the invasive nature of the species, have scientists worried the impact that they may have on local ecosystems. This includes the total displacement or eradication of species native to the Gulf. They are voracious eaters and feed primarily of snapper and grouper, both species that are also popular with humans. So far the primary way of dealing with the fish has been to hunt and kill them.

That means that the one and only predator of the fish in the Western Hemisphere is human. It turns out that the fish is wonderfully edible with a sweet, white flesh. Gourmands around the country are enjoying the experience. Not surprisingly, considering their diet, they are reputed to taste most like snapper or grouper. This is giving rise to new recipes for the fish. For a recipe for Lionfish Romeso Stew, click here.

If you live in or are planning to visit any of these areas and have an unfortunate encounter with a lionfish, soak the infected area in warm water for 30 to 90 minutes and seek medical attention immediately.

This Makes Me Question the Food Chain. The Giant Shark-eating Grouper Animal Video of the Day!!!
What Lies Beneath: A Scary Skate Skeleton
For That Jellyfish Kind Of Mood