"Is your pet guinea pig tired of wandering around the house unarmored
and vulnerable? Do they get picked on by other guinea pigs? Has your
guinea pig ever wanted to go with you to a Renaissance Faire but had
nothing to 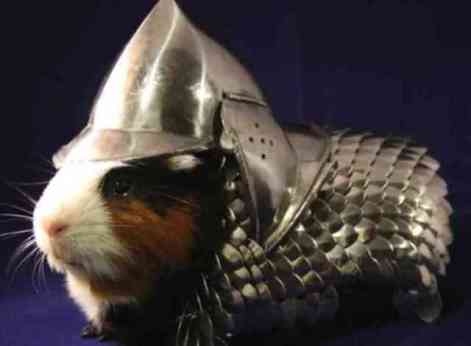 Lucky in his Suit of Armor (You Tube Image)wear?" This was the sales pitch one man who went by the user
name mightysox when he was selling his late guinea pig's suit of
scale-mail armor. It brought in over $24,000 -- right up until the
bidder backed out of the deal.

It turns out that mightysox is actually Sean McCoy. After purchasing a tiny, guinea pig-sized helmet at a Renaissance Fair for his pet, McCoy got the idea to create a suit of armor to go along with it for Lucky, his pet guinea pig. It took him weeks to weave the mail together, trashing his hands with blisters from the repeated use of pliers. The painstaking craftsmanship is evident in the beautiful piece.

It was only after Lucky had died of natural causes that McCoy decided to put the suit up for auction as an homage to the little rodent. The proceeds of the sale went to the Metropolitan Guinea Pig Rescue just outside of the Washington, D.C., area. MGPR takes in unwanted guinea pigs, rehabilitate them if necessary, and finds them new homes. It was the organization that had brought them together in the first place. 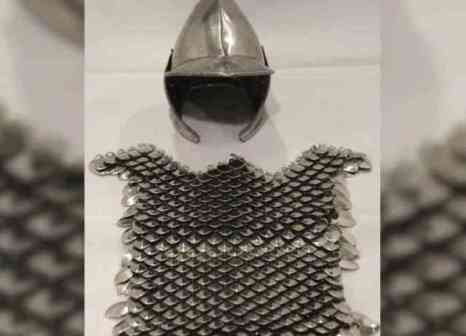 Lucky's Suite of Armor (You Tube Image)There are those who voiced the opinion that McCoy should have buried Lucky in his beautiful armor, but McCoy doesn't hesitate to respond with the fact that Lucky hated wearing the armor because it was heavy and uncomfortable. The little guy put up with it long enough for McCoy to get some great photos. Beyond that he wasn't too keen on putting Lucky through that again.

When McCoy put the armor up for sale on eBay a bidding war ensued as 47 bidders made 156 bids in 10 days. The final amount when the bidding closed was $24,300. An astonishing amount for such a tiny thing. It seemed to good too be true, and of course, it was. The winning bidder may have gotten cold feet, a case of buyer's remorse, or just a reality check when he realized how much he had actually bid, and withdrew the bid.

So the suit of armor went up for bid again and this time it earned a much more modest and respectable $1,150 to help support the rescue organization. RIP Lucky!