Groundhog Day Has A Long History, As Does Punxsutawney Phil 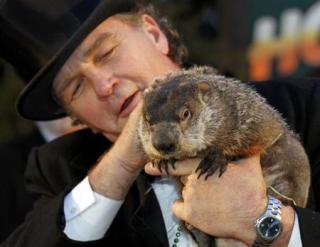 Punxsutawney Phil, Seer of Seers, Sage of Sages, Prognosticator of Prognosticators and Weather Prophet Extraordinary saw his shadow again today, forecasting six more weeks of winter in the year 2012 that, so far, has not seen much winter.  The 100+ year-old marmut is the most famous weather predictor in the world...

... even though he has been correct only 39 percent of the winters between 1887 and 2011.  This year, Phil's prediction is being refuted by many well-known human prognosticators, so we'll see how well the great groundhog fares against them.

According to the Inner Circle of Punxsutawney, PA, the same Punxsutawney Phil you see today was the very first groundhog to predict the weather in 1887, when German settlers moved to the area. The practice of trusting a hedgehog's weather forecast was a tradition
the German settlers brought with them from the 'old country,' and Phil the
groundhog, being a Punxsutawney resident, became the new world's
hedgehog.

If Phil is the original groundhog, that would make him about 122 years old, outliving other well-protected members of his species by about 110 years. His current handlers, John
Griffith and Ron Ploucha, certainly take excellent care of Phil, and his
longtime wife and companion, Phillis.  The groundhog couple live in a climate
controlled area of the town library, and every summer they drink a sip of secretly formulated Groundhog Elixir, which adds another 7 years to their lives.