The world's foremost weather prognosticator has tens of thousands of fans coming to his doorstep on one special day of each year, has his long-range weather prediction mentioned in local forecasts around the globe on that day, and even has a ball held in his honor, along with numerous other celebrations.  And, he and his predecessors have been around for centuries.

Punxsutawney Phil, that "100 percent reliable " weather forecasting rodent from the little town just north of Pittsburgh that bills itself as the weather capital of the world marks his 127th year of forecasting on February 2.

According to legend, one that goes back centuries by the way, the groundhog will predict six more weeks of winter if he emerges from his hole in the ground after a long winter's sleep and sees his shadow. If he doesn't see his shadow, spring is just around the corner.

While the origin of the legend of the groundhog is uncertain, it can be traced back as far as Roman legions moving through what is modern day Germany. And it predates that period in history. The conquering Roman armies brought the tradition with them and the Germans picked it up, believing that if the sun shined brightly on Candlemas Day, an ancient festival marking the midpoint of winter, halfway between the shortest day of the year and the spring equinox, a hedgehog casting a shadow on that day would indicate six more weeks of winter.

Or, as an old English song goes:

If Candelmas be fair and bright,

Come, Winter, have another flight;

If Candlemas brings clouds and rain, 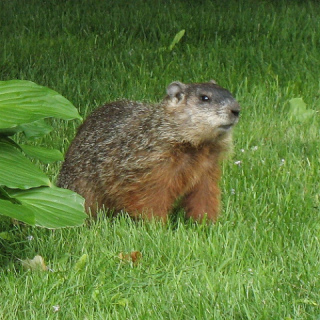 One of Phil's cousinsMany of Pennsylvania's earliest settlers were Germans, who brought their customs with them, including Candlemas Day, which was celebrated on February 2. But faced with an extreme shortage of hedgehogs -- they aren't native to North America -- and a profusion of groundhogs, the Germans easily switched allegiances to the larger animal they felt resembled the prickly little European insectivores. Actually groundhogs and hedgehogs aren't related. Groundhogs (Marmota monax) are burrowing herbivores that are covered with fur. Hedgehogs don't live in burrows, are covered with spines similar to a porcupine  and eat insects.

So, how did Punxsutawney, population about 6,700 (except on and around February 2, when tens of thousands of visitors from all over the world descend on this small Pennsylvania town) become home to the world's foremost weather prognosticator? It started with a small local celebration in the nearby woods in the 1800s. The town newspaper, the Punxsutawney Spirit, reported on the event in 1886. A year later, townspeople walked up to Gobbler's Knob,

to see if the groundhog they called Phil would see his shadow. They've been hiking up that trail ever since.

Phil has a rather long name -- Punxsutawney Phil, Seer of Seers, Sage of Sages, Prognosticator of Prognosticators and Weather Prophet Extraordinary.  Groundhogs, in general, are also known as whistlepigs and woodchucks

* While most groundhogs live to be between eight and nine years old, Phil is 127 this year.  His handlers claim he sips a special secret elixir of life each summer, thereby extending his years by another seven

* The average groundhog weighs in a about 12 to 15 pounds.  Phil tips the scales at 20 pounds

* Phil is cared for by the Inner Circle of the Groundhog Club, a group of local dignitaries who keep the tradition going.  Membership in the club is open to the general public

* This is one groundhog who doesn't spend any time underground.  Phil has a comfortable climate-controlled glass enclosed den year round at the town library.  And the "burrow" used for his annual appearance on Gobbler's Knob is heated

* Phil did not appear in the Hollywood movie "Groundhog Day," starring Bill Murray.  An understudy was bought in, one that bit Murray on the finger three times.  According to the Philadelphia Inquirer in 1993, the actor had requested Phil, whom he described as " ... very well-behaved, treated like royalty and a true professional."

Other highlights of Phil's long and varied career:

* During Prohibition, Phil threatened to impose 60 weeks of winter on the community if he wasn't allowed a drink

* In 1958, Phil announced it was a "United States Chucknik," rather than a Soviet Sputnik or Muttnik that became the first manmade satellite to orbit Earth

* In 1981, Phil wore a yellow ribbon in honor of the American hostages in Iran

In 1993, Columbia Pictures released the movie "Groundhog Day."  In the years following the release of the movie, record crowds numbering as high as 30,000 have visited Gobbler's Knob

* Phil appeared on the Opah Winfrey show in 1995

* In 2001, Phil's prediction was shown live on the JumboTron at Times Square in New York City. Pennsylvania Governor Ed Rendell attended the ceremonies, making him the first sitting governor ever to do so

So, how accurate is he?

In 127 years of weather forecasting, how accurate are Punxsutawney Phil's longrange (six-week) forecasts?  To a man, the Inner Circle of the Groundhog Club claim that Phil is 100 percent accurate!  Stay tuned.  Groundhog Day ... and Phil's 2013 forecast ... is February 2.

Educational
Tips On Easter Treats For Your Dog

Fake Frog Dissection Kits Approved By Students, PETA, Frogs
Your Cat On Catnip VS You On Catnip (With Video)
Comments