The owner of a drape and blind shop in Staten Island, New York, received
the surprise of a life time when he looked out of his shop window
Wednesday morning only to see a small pony trotting 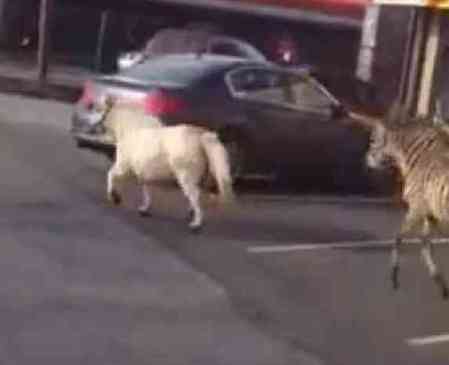 Pony and Zebra on the Loose in Staten Island (You Tube Image)through the parking
lot. If that weren't enough, a zebra was hot on the pony's heels. The
shop owner grabbed his cell phone and started filming so that someone
would believe his story.

A few seconds later a couple of men in black came running by with lassoes, apparently in search of the equine pair The pair had escaped from a petting zoo and had what ABC News has called a "Madagascar Moment" before being recaptured and returned to their paddock.

Razzi the zebra and Casper the Shetland pony have been sharing living space at the petting zoo for some time and are old pals, so it is no surprise that they stuck together on the outside. There is no word on how they planned and executed the Great Escape, but both seem to be happy to be home again.

This is What I Looked Like in College Algebra -- The Animal Video of the Day!!!
Give A Reindeer Pet This Christmas!