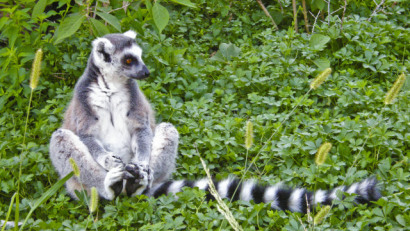 Gizmo the ring-tailed lemur was stolen from his Mobile County, Mississippi home in January by a crook who had hoped to cash in on the potential reward money for “finding and returning” the poor creature. James Edward Welborn Jr. has been accused of breaking into a family’s house to steal both Gizmo and a flat screen television.

When James had learned that Gizmo’s family was offering a $1,000 reward for the lemur’s safe return, he contacted them with the intent to collect the bounty. Luckily for Gizmo, James dumped the lemur off on an associate of his, who then tipped off the police that the exotic pet might be stolen property.

Since local law enforcement was informed by both the caretaking tipster and Gizmo’s family for holding the lemur captive, James was arrested and charged for possessing stolen goods. But don’t worry- with the bad guy caught, and the purloined primate back home where he belongs, this story had a happy ending after all!

Ring-tailed lemurs are native to the southern areas of the large island of Madagascar, where they naturally live in groups averaging 30 individuals. Noted for their long, fluffy, black and white banded tails, this species of lemur easily adapts to captivity and is a common staple in zoological parks around the world, with more than 2,000 ring-tailed lemurs currently on display.

MacGyver the Lizard -- The Cool Pet Animal Video of the Day!!!

Tarantulas In My Mailbox? It's More Likely Than You Think