GPSing The Longest Mammal Migration Ever! 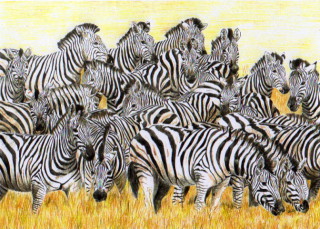 insect worlds, it wasn't until 2012 that researchers were able to determine the longest migration of a mammal. In the past, guess-work has been used to determine the migration distances of the wildebeest, the caribou, the Tibetan antelope and others. Today, with the use of modern technology -- namely GPS tracking -- one specific herd of zebra's round-trip migration tallied a record-breaking 300 miles (500 kilometers).

A Band of Brothers 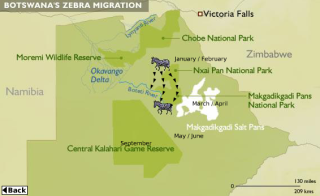 This odyssey made by approximately 2000 zebras encompasses a journey commencing in the floodplains near the Namibia-Botswana border at the beginning of the wet season. It then follows a very unique 'straight-line' route across the Chobe River and ends at the seasonally full waterholes and grasslands of the Nxai Pan National Park in Botswana. The zebra spend about 10 week before heading back home just when the dry season begins. These findings were published this week in the conservation journal Oryx.

To track this path with accuracy, Robin Naidoo, senior conservation scientist at the Washington-based World 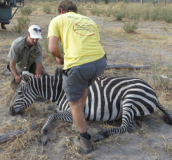 Applying GPS collarsWildlife Fund led a two-year study on the migration. "To get the data . . . researchers fired tranquilizer darts at the zebras from a helicopter, landed and affixed GPS collars," Naidoo said.

He said the main reason migrations of this type were not detected earlier was because it was impossible to know where the animals were going without GPS tracking technology, which has become more available and affordable in the last two decades.

Leading researchers to believe in a genetic trigger versus environmental motivation for this specific migration, the Oryx report pointed to the possibility these zebras were physically wired for such a journey. In other words, they could be following a pattern that is so ancient it has become embedded in their genes.

Mike Chase, who heads up Elephants Without Borders, a Botswana-based group participated in this zebra migration study and noted that this migration stirs the heart. “We all yearn for that, the romance of wild, open spaces,” Chase said. “There are very few places left on our planet where animals and wildlife have the natural ability to roam in the context in which they evolved over thousands of years.”

A good number of migration routes have disappeared over the years as a result of species' extinction, fencing, land

occupation and other forms of human intervention. It's been reported that animal species throughout the world are being wiped out 1,000 times faster than they were before man arrived on the scene.

Important for the future that this migratory route is protected. Tony Sinclair, Naidoo’s fellow academic at the University of British Columbia said the zebra research showed that the animals have to move through “human-dominated lands” and that the migration could be lost if more protective measures are not put in place.

Learn from the Butterfly

One has only to learn from the Monarch butterflies what dangers could potentially lie ahead. The monarch's 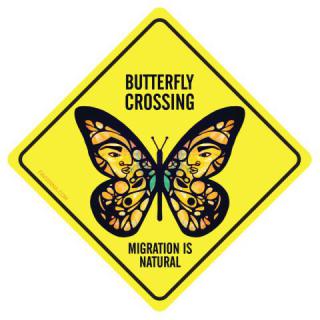 migratory routes are under threat due to people cutting down their favorite trees to build roads, houses and farms. Monarch butterflies use the very same trees each and every year when they migrate, which like the zebra might be due to genetic disposition. Since each year there is a new generation of monarch butterflies, it appears the are wired to know which trees are the right ones to hibernate in.

Protecting this wildlife is imperative to the balance of life on this planet. When plans for that next road or construction development is being considered, ask yourself the question how it affects those creatures that might have called that territory their own and who were 'first' to lay claim to that land, centuries before man's arrival? If, a conflict of interest is determined, it behooves us to reconsider an alternative plan.