Gorillas, Endangered Gentle Giants With A Heart Of Gold 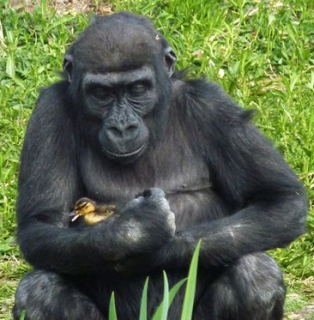 While gorillas are often characterized in film as wild and mean-tempered jungle beasts, there's too much evidence in the real world that suggests the contrary. These magnificent creatures are not only our closest cousins on the evolutionary scale (98% of their DNA is identical to that of humans), they also possess humanistic, loving personalities. They share strong emotional ties with their family members throughout their lives and even mourn their passing.

Today’s caption photo is a great example of the emotional intelligence of these animals — and their sweet nature — as this one cuddles a lost duckling at the Bristol Zoo in England.

Gorillas in the Mist 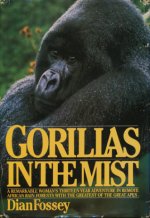 Changing the mindset as to how we view gorillas, primatologist and naturalists Dian Fossey and her seminal work ‘Gorillas in the Mist’ was a pioneer in this field.

During the mid-60’s, Fossey studied under archaeologist Louis Leakey who encouraged here to assume a quest to study the endangered gorillas of the Rwandan mountain forest. Accepting the offer, she subsequently lived among the mountain gorillas residing in the Democratic Republic of Congo. She was one of the first to poignantly describe the mountain gorillas she met as “gentle giants.”

Published in 1983, Fossey's book went on to become a best-seller. A film with the same name was also released in 1988, starring Sigourney Weaver as Fossey.

In the wild, it used to be that a gorilla's only predator was leopards, which is known to attack vulnerable youngsters. But today the greater threat is ‘man.’ In recent decades, gorilla populations have been affected by habitat loss, disease and poaching. Subsequently all gorilla species are classified as endangered by the International Union for Conservation of Nature (UCN).

Due to the extensive dense habitats in which they live, it is a challenge to monitor and protect gorilla populations and therefore difficult to implement successful conservation techniques. But there are efforts underway to change that.

Koko speaks for his kind and mankind . . .

Koko is 45 year-old female western lowland gorilla who is known for having learned a large number of hand signs from a modified version of American Sign Language (ASL). Her caregiver, Francine "Penny" Patterson, reports that Koko is able to understand more than 1,000 signs of what Patterson calls "Gorilla Sign Language" (GSL). 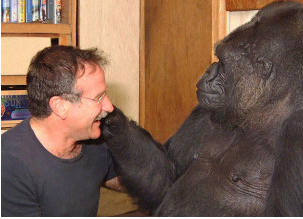 Robin Williams & KokoIn 2014, in a post titled: Koko The Gorilla’s Bond With Robin Williams, I reported how the late Robin Williams before his death formed a fast friendship and communicated with this gorilla in a way that was very memorable for the animal. In fact, when Koko was told of Williams' passing, it was reported he visibly took the news very hard.

More recently, at the COP21 Climate Conference in Paris that President Obama attended last December, Koko was invited to represent the “Voice of Nature.” She was a natural for the job in assuming  the honorary position of 'ambassador for endangered species.'

There she was filmed in an amazing PSA which was subsequently edited from various takes, for brevity and continuity. In this feature, Koko was clear in focusing on and delivering her central-themed message: Man is harming the Earth and its many animal and plant species and needs to “hurry up” and fix the problem.

There is a petition at the end of the video, which asks the the world to include the preservation of biodiversity on the planet. Readers, I appeal to you to help save these Gentle Giants with a heart of gold to remain safe and healthy in the wild, by signing this petition: http://natureseeyou.com/en#petition Thank you.