The first International Goldfish Championships took place in Fuzhou in southeast China last Thursday. Goldfish breeders from 14
countries or regions brought 3,000 fish to compete. Among other categories,
they vied for the 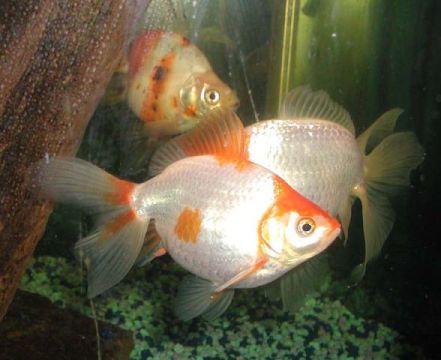 Goldfish (Photo by Raul654/Creative Commons via Wikimedia) title of "World Goldfish Queen."  The star of the show
was a brilliant, show-stopping three-pound goldfish.

The breeding and raising of goldfish is big business in China, bringing millions into the economy every year. In Fuzhou alone the industry brings in $30 million. While most of the fish are raised for markets outside of China, local trade in goldfish is on the rise.

Lined up on tables in giant bowls, the fish were judged on criteria within five dimensions -- breed, shape, size, color, swimming posture, and overall impression. After the competition, all of the contestants were exhibited at the Fuzhou Strait International Conference and Exhibition Center.

Serpent-Like Fish Beached Near Baja
PetsLady's Pick: Gorgeous Clownfish of the Day
Have You Ever Seen A Feather Starfish? The Animal Video Of The Day!!!
Graffiti Artist Jimmy Swift Transforms Rock Into Jaws-Like Shark
Comments