Give The Gift Of An Animal This Christmas: Heifer International

Christmas is a time when people often choose to give to charity as a
part of the spirit of the holidays. One way that you can help spread
hope and prosperity around the world is by giving the gift of an animal
through Heifer 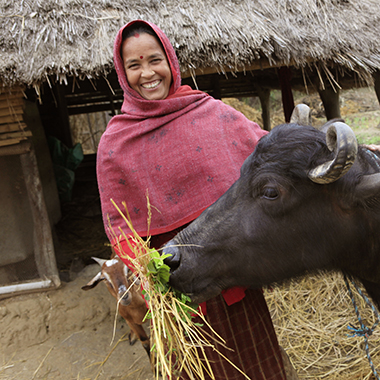 A woman shows off her water buffalo.International. With your donations the organization is
able to supply small farmers in third world nations with an animal or
group of animals that help these people rise above abject poverty.

Impoverished people the world over are taking their animal gift and turning it into small, growing concerns that are transforming their lives. The animals given are not destined for slaughter, but used to create money-making avenues. Someone who receives a pig can raise the eventual piglets for sale. In the meantime they can harvest the manure to sell to other local farmers to earn some money. The manure also helps them grow more of their own food. A few chickens produce eggs to sell, as well as manure. Goats and sheep produce wool to sell. You get the idea. 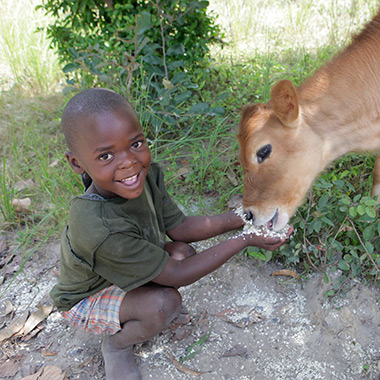 A boy and his new cow friendGiving the gift of an animal is giving the gift of hope and a future. Instead of just another hand out it is a hand up. It is also a gift that keeps on giving as some of the animal offspring are passed on to other families in need. Then they pass on their eventual animal offspring. It is a trickle-down theory that actually works.

Animals gifted by Heifer International include cows, pigs, water buffaloes, llamas, donkeys, oxen, camels, goats, rabbits, chickens, geese, ducks, bees, and even Guinea pigs.  The animals also often go to women who are raising their children or grandchildren alone after the loss of a spouse or others.

Each family is given training in how to raise the animal and how to make use of the resources it provides. They are helped to prepare the appropriate shelter and pen for the specific type of animal. Once this is done they will receive their animal or animals and start on the road to being self-sufficient.

Heifer International has been around since 1944 and has helped more than 18.5 million families in 125 countries around the world. Their programs are often considered the most successful in the world at helping to alleviate hunger and poverty. The organization bills its gift catalog as "The Most Important Gift Catalog in the World."

For a donation as small as just $10, you can have a hand in improving someone's life drastically. And YOU get to choose what type of animal you are donating, or helping to donate, if you want to.