It sounds like the beginning of a lame joke -- "So a giraffe walks into a
restaurant . . ." It's no joke. At The Lion Park just outside of
Johannesburg, South Africa, a giraffe decided to see how the other half
lives when he entered an open-air restaurant. It gave park-goers the
surprise experience of a lifetime and was caught on video. 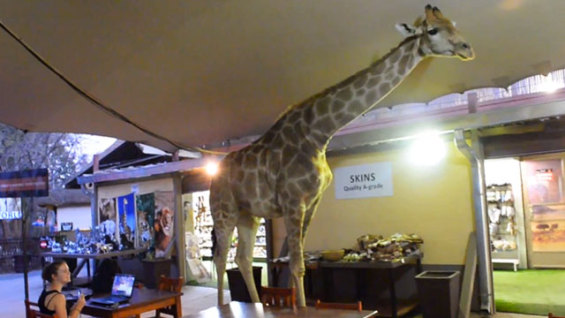 A Giraffe Walks into a Restaurant (You Tube Image)

The towering ungulate had to bow its head to fit under the roof and it took its time sauntering through the food establishment. It did stop for just a moment to taste a potted plant, but apparently was not impressed with the cuisine overall. It wandered on just as casually as when it wandered in.

At The Lion Park giraffes and antelope, zebra, giraffe, springbok and other animals are just a part of the experience. These animals are allowed to roam the park freely and visitors can get up close and personal if they want to. Apparently even if they don't want to. Still, it is the sort of experience you can tell your grandkids about.

Computer Turtle Mouse Is Worth Shelling Out For
Comments