Workers at the Toba Aquarium in the Mie Prefecture in Japan are baffled
by the behavior of one of their marine inmates. For four years now the bathynomis giganteus in their care has been on a hunger strike. Though fed 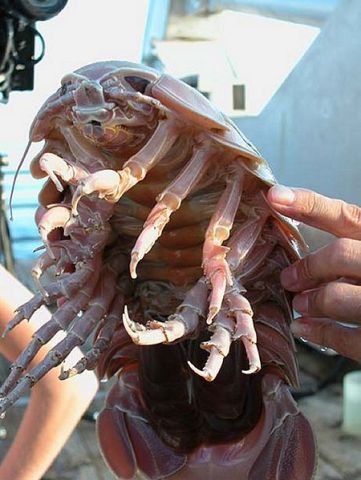 Bathynomis Giganteus (Photo by NOAA Photo Library/Creative Commons via Wikimedia)daily along with the crustaceans, the giant isopod refuses to eat.

Bathynomis giganteus is a strange creature from the ocean that looks a great deal like a giant roly-poly or pill bug. That is because they are closely related, despite the drastic difference in size and habitat. They are scavengers that have adapted to survive for long periods without food.  However, when food is plentiful they are voracious eaters. They have even been known to chew through underwater cables.

Each day Takaya Moritaki prepares bowls of mackerel to feed the crustaceans and isopods. One of the isopods, named No. 1, entered into its fifth year of fasting at the beginning of January. Moritaki has taken pains to make sure that No. 1 is getting food, even placing a whole mackerel in front of the creature.

No. 1 appears interested in the fish at first. It pokes around at the carcass of the fish and rubs its face against it, Then it loses interest and walks away. The aquarium has tried to make sure that they have created the optimum environment for both feeding and breeding for the isopods, but they are still frustrated by the behavior of the creature.

Moritaki is concerned about No. 1's weakened state and just wants it to eat something.

Crustaceans
News Stories
Weird, Odd or Bizarre
Explore The Deep End Of The Pool In Style

True Facts About the Cuttlefish -- The Animal Video of the Day!!!
Comments