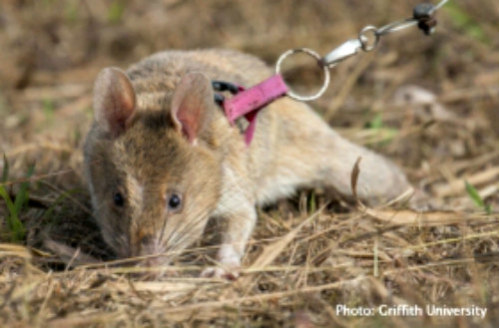 While rats have gained in popularity over the years as domesticated pets, they still give most of us the creepy crawlies. It’s hard not to think of them scurrying around sewers laden with contagious diseases or invading homes and gnawing at wiring and being a nuisance in general. Now, something good is coming of them beyond lab testing, and they’re actually saving lives in a rather unexpected way. That’s right. The furry rodents are turning into super heroes in countries burdened with landmines and, as it turns out, they're capable of detecting diseases.

Sadly, there are some 60-odd countries located around the world that are still inundated with landmines and other leftover explosive devices. These highly destructive implements of destruction can cause horrific accidents with tragic consequences and pose barriers to future development while deterring economic growth. Anti-Persoonsmijnen Ontmijnende Product Ontwikkeling (Dutch for Anti-Personnel Landmines Detection Product Development) or APOPO is striving to develop approaches that combine existing de-mining technology with Mine Detection Rats (HeroRATs).

The Belgian group is doing this for the purpose of returning land that’s been rendered mine-free back to communities whose inhabitants have for decades lived in fear of being blown to bits at the slightest misstep. Often times the victims are young children who are forever crippled, both emotionally and physically, by these horrible events. Back in the 1990s, Princess Diana made it part of her personal crusade to help the people of underdeveloped nations plagued with war to overcome the disabilities they incurred as a result of these previously unexploded landmines. Trained HeroRats are now at the heart of that campaign.

So, what’s a HeroRAT? They’re giant African Pouched Rats trained almost from birth to sniff out landmines, much like we train bomb-sniffing dogs here in the States. Training an animal for tasks such as these can take years to accomplish and thousands of dollars in the making. African Pouched Rats are also being trained to smell and detect tuberculosis, so they’re a multifaceted little creature — or not so little. These giant cousins to what we’re used to seeing can reach 5-8 lbs. when fully grown. They are considered highly intelligent and have super sniffers that are some of the most sensitive in the animal kingdom.

At five to six weeks old the rats begin their rigorous training. Due to their relatively small size in relation to dogs, they’re more easily handled and transported, a big plus for multiple handlers and communities utilizing them. One HeroRAT can search 200 square meters in just 20 minutes while a de-miner equipped with a metal detector can take anywhere between one and four days to search the same area. Living on a diet of fruits and grains, the little buggers cost $6,500 to fully train and have a life expectancy of roughly eight years, allowing groups like APOPO to regain their priceless investment. Hopefully, their goodwill endeavors will change the world’s perception of rats in the future. If you’re interested, you can symbolically adopt one from APOPO.