In the days of late winter or early spring it has long been a custom in
Germany and some other areas of Europe a straw bear was brought out in
celebration processions. The bear was thought to drive winter away. 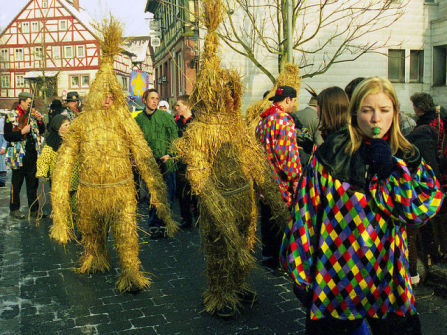 Straw Bears in a Procession (Public Domain Image)
These days the bear is most often a symbol of Ash Wednesday to mark
the beginning of Lent and the end of the carnival season.

The bears are either effigies or men in costumes. They are made of straw from wheat, rye, oats, or spelt, though shortages of real straw have caused more of the costumes to be made of artificial straw. Some of the bears are somewhat realistic while others are very abstract. In some communities the event officially ends when the effigy is burned. 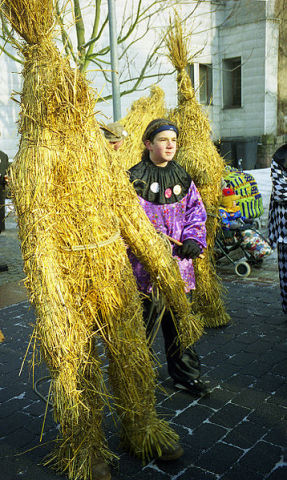 Straw Bears in a Procession (Public Domain Image)Historically the bears were accompanied by a group of people and musicians. They would go from door to door begging. They would be given eggs, lard, flour, carnival cakes, or money. This part of the straw bear activities are no longer practices and the character is largely just a part of carnival processions, though there are still some independent straw bear festivals.

Some folklorists believe that the bears were also meant to represent the dancing bears that were once taken from village to village as a form of entertainment.

While the straw bear is most common in areas of Germany, Poland, and the Czech Republic, there is also a popular straw bear festival held each January in Whittlesea in England. While the origins of this particular tradition seem to be lost, the straw bear was a part of a festival for Plough Monday. This day is the first Monday after Twelfth Night, and the time when the new agricultural season is considered to begin.

The Whittlesea festival has become so popular and the procession so long that it now takes two men to represent the bear. The costume has also been designed for quick removal for those necessary pit stops along the way.

The appearance of the Whittlesea straw bear is very similar to some of the German versions.

Have We Finally Cracked The Yeti Code?
Comments